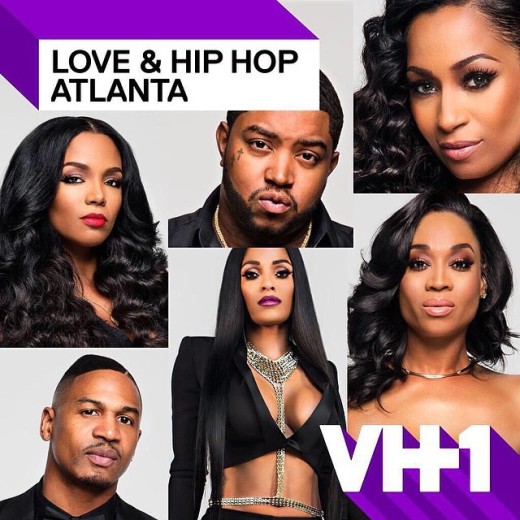 I just learned that VH1’s #1 Rated cable series “Love & Hip Hop: Atlanta” is coming back and it’s going to be off the chain. The premiere episode hits the small screen on Monday, April 4 at 8PM ET/PT, the competition is fiercer than ever as new and familiar faces work to take over Atlanta’s music scene.

K.Michelle, fresh off announcing her third studio album, “More Issues Than Vogue,” returns to Atlanta ready to handle some unfinished business and settle the score. With her BFF and Puerto Rican Princess Joseline by her side, there will be no shortage of laughter and drama when these two strong-willed divas face off against new and familiar adversaries.

D. Smith is a groundbreaking music producer who makes her debut as the first ever transgender female in the “Love & Hip Hop” franchise. This Miami-born, Brooklyn-bred Grammy Award-winning writer turned artist has worked with some of the hottest in the game, including Lil Wayne. Smith’s defining moment came after being tapped by Lil Wayne to be a part of his most successful project to date “The Carter III,” which sold one million copies in its debut week, one of only three rap albums in history to ever achieve this feat. With her spitfire sidekick and aspiring singer Betty Idol by her side, this dynamic duo will take the Atlanta scene by storm.

New to the scene is Karen “KK” King. KK is not your average mother – she was previously the vivacious, outspoken “momager” to her sons Scrapp DeLeon and Sas. Through her musical connections, KK brokered major deals for her sons with Akon’s Konvict music and T-Pain. Additionally, she is a longtime friend of Stevie J, who she not only considers a lifelong friend, but also her brother and uncle to her sons.

Sas & Scrapp set the rap game ablaze as teenagers in a group called Da Razkalz Cru. These days, Scrapp manages Sas to reestablish him as a solo artist. But for Scrapp, relationship drama with girlfriend Tommie, who isn’t shy when it comes to speaking her mind; and Tiara, the mother of his son, is distracting him from the music.

Tiara is the perfect combination of brains and beauty. She is a reserved corporate dynamo by day and a sexy club vixen by night. Don’t let her prim and proper exterior fool you; Tiara is not one to be reckoned with. Tommie is a charismatic model who is known for her unpredictable antics, rapid-fire wit and her relationship with Scrapp. One thing is for certain, beef between these two may be headed for disaster as they battle it out for Scrapp’s heart.

Joseline Hernandez and Stevie J make their way back to Atlanta fresh from the rolling hills of Hollywood. After spending time in LA, Joseline is more determined than ever to become a triple threat in the entertainment industry. Now that the big fish is back and stirring up the small pond, will Joseline be able to mend her fences with her old cohorts or will her thirst for vengeance lead to her downfall? Meanwhile, will Stevie’s dreams of a “Life Partner Gang” be a reality as he, Joseline and Mimi Faust forge a forever family? Can Joseline and Mimi continue their personal progress for the sake of Eva?

Mimi has happily moved on and is in a new relationship. Number one BFF Ariane Davis gives her stamp of approval on the couple, but can Mimi hold it all together? And how will Stevie and Joseline react when Mimi introduces her new boo to the family?

Rasheeda and Kirk Frost have overcome their tumultuous past and are stronger than ever. This season, it’s all about family. Rasheeda’s store Pressed is a huge success staffed with loyal, but inexperienced family members. The couple is trying to prove that you can have it all, but have they taken on more than they can handle?

No stranger to being fierce is none other than Karlie Redd. Karlie’s star is burning brighter than ever. A serial entrepreneur, Karlie has opened another boutique, specializing in sexy women’s fashions for all occasions and venturing into a new radio career which embraces both her messiness and her sexiness. However, her busy schedule has put her relationship on the rocks with boyfriend and R&B/Soul artist Lyfe Jennings. Luckily she’s got her girl Jessica Dime by her side. Together, they may just conquer Atlanta.

Cousins Scrappy and Yung Joc are both back on the market after ditching their girlfriends for the single life. The two are shacking up in a bachelor pad with a bevy of beauties by their side, so the turn up will be real. While Scrappy has his hands full with music, fashion, and model management, Joc continues to be on the grind to get his career back on track. However, the cousins may quickly discover that mixing business, pleasure and family could be a recipe for trouble.

Tammy Rivera, rapper Waka Flocka Flame’s wife, marks her return to Atlanta. Her flourishing company T. Rivera is the umbrella for a myriad of multifaceted companies, including a hair line, a clothing line and a swimwear line. Tammy’s brand is rapidly expanding and she aspires to blaze a trail to empower women into feeling sexy as wives and powerful business women. Will she be welcomed with open arms or will her return ignite new beef and old feuds?

Momma Dee is finding the honeymoon may soon be over with new husband Ernest – it seems wedded bliss is sometimes not all it’s cracked up to be.

Watch as the cast hustles to stay at the top with the season premiere of “Love & Hip Hop: Atlanta,” Monday, April 4 at 8PM ET/PT.