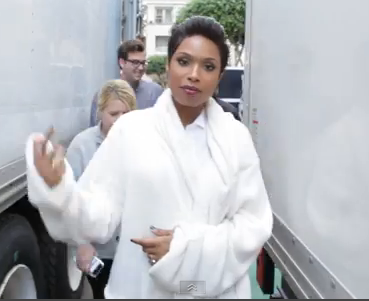 Last week, we covered the release of Jennifer Hudson new single featuring the King of the South rapper T.I. Well during the video, she introduce the masses to “Jones” – her sassy alter ego. Get a chance to go behind the scenes to meet her!!!

Now, VEVO are giving folks a behind the scenes look at how the visual for the Pharrell and T.I. assisted cut was pieced together.

Did you just get a chill after reading those two names? I mean, this video is filled with nothing but POWERHOUSES!!!
J. Hud has did it AGAIN, and this time with the help of some friends. Pharrell couldn’t have been a better choice when it comes to producers. His vision and talent are impeccable to say the least. Then when you add on the flare of the infamous T.I., “Greatness is definitely in the making!”

Get to know the “new” Jennifer after the jump…