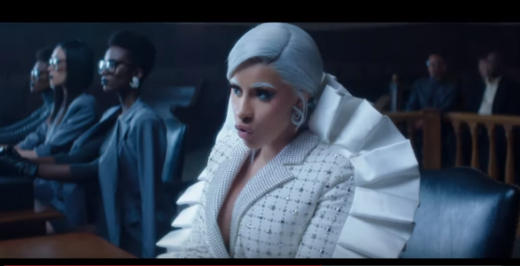 On Wednesday, the rapper released the killer visuals for her latest single, “Press,” which begin with a sexy ménage à trois scene that quickly turns violent when Cardi, 26, pulls out a handgun.

The Jora Frantzis-directed clip then follows Cardi as she goes through all the stages of a trial, from being brought into an interrogation room to walking into the courthouse and eventually appearing in court in front of judges. After the lights go out in the courtroom and chaos ensues, the witnesses are shown to be dead and Cardi is whisked away to prison, where she ends up drowning her cellmate in their toilet bowl.

Throughout the video, Cardi is also shown completely nude (but with her nipples and genitalia digitally removed) in an empty lot with a fence around it. A bloodied Cardi leads a pack of female dancers, who are similarly nude, before they’re all shown to be dead too.

Amid the release of the new music video, Cardi has been embroiled in her own real-life legal battle. On Tuesday, she made an appearance in Queens County Criminal Court after being indicted by a grand jury over a strip club brawl she was involved in last August.

Cardi is alleged to have ordered an assault on two bartenders, identified as Jade and Baddie G, at Angel’s Strip Club over her belief that Jade slept with Cardi’s husband, Offset (whom she shares daughter, Kulture, 11 months, with) — and the indictment was officially unsealed on Tuesday.

A police spokesperson previously told CNN that Cardi was allegedly “throwing chairs, bottles and hookahs in the club at 3 a.m.,” leaving both bartenders with injuries. NBC New York reported Cardi was caught on camera tossing an ice bucket at the women.

Cardi was initially only charged with two misdemeanor counts of assault and reckless endangerment, but — after rejecting a plea deal in April — now faces 12 charges, including two counts of felony attempted assault with intent to cause serious physical injury, as well as criminal solicitation, conspiracy and harassment for her part in the brawl, according to the indictment.

Ahead of Tuesday’s hearing, Cardi’s attorney, Jeff Kern, did not immediately return PEOPLE’s request for comment, though he previously told reporters he was “aware of no evidence that she caused anybody any harm on that night. We expect that the matter is going to be resolved expeditiously.”

According to the Associated Press, the “I Like It” singer pleaded “not guilty” to the 12 charges and the next court date is set for Sept. 9, but she is not required to appear.