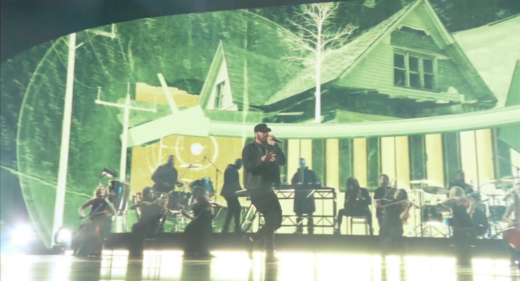 The Oscars 2020 | Legendary comeback from Eminem “Lose Yourself” Live | FOX

Eminem finally performed his Oscar-winning track “Lose Yourself” at the Academy Awards. It just took him 17 years to get there.

Speaking Monday to Variety about his surprise award show performance, the rapper, now 47, said he thought performing on film’s biggest night at this point in his life was a better idea.

“I kinda figured maybe since I didn’t get a chance to do it at the time, maybe it would be cool,” Eminem said. “Back then, I never even thought that I had a chance to win, and we had just performed ‘Lose Yourself’ on the Grammys with the Roots a couple of weeks before the Oscars, so we didn’t think it was a good idea. And also, back at that time, the younger me didn’t really feel like a show like that would understand me.”

The rapper said he flew to Los Angeles the week before and “probably (had) four or five rehearsals” offsite to keep things a secret.

“It was presented to me that way and I said ‘Oh that’s kinda dope, to not even announce it,’ ” he recalled.

Oscars producer Lynette Howell Taylor told USA TODAY the idea to have Eminem perform “Lose Yourself” 17 years after he won best original song came because “we made a show that was about impact and we wanted to do a segment on the impact of music. And we reached out to see if that was something he wanted to be involved in and we were just really lucky he said yes.”

Eminem was “blown back” when he discovered he had won the Oscar for best original song back in 2003 for the track featured in “8 Mile.” He recalled being at home with his daughter Hailie, now 24. His keyboard player Luis Resto accepted the Oscar instead and called the rapper afterward, who had been trying to sleep.

“But then when I found out I won, ‘That’s crazy!’ That to me shows how authentic and real that award is — when you don’t show up and you still win,” Eminem said. “That makes it very real to me.”