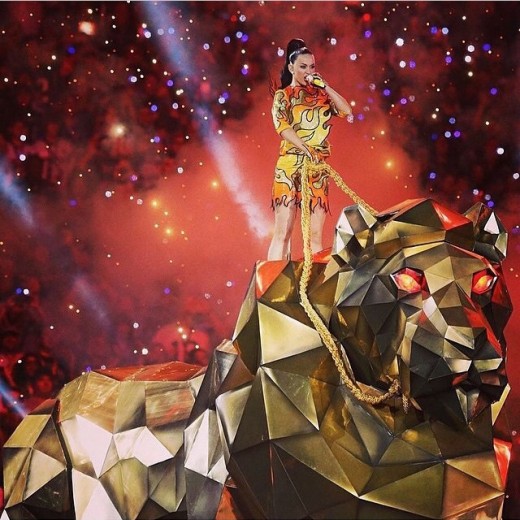 Singer Katy Perry KILLED it last night during the Super Bowl XLIX halftime performance! From beginning to the end the “Fireworks” singer gave fans exactly what they wanted…a good show.

The songstress entered the field riding a metal tiger and singing “Roar!” Later she was joined on stage with rock legend Lenny Kravitz. Besides looking good and playing the hell out of his guitar, him and Perry gave it to us! They performed her first big hit “I Kissed A Girl!” Perry even gave us a little grind action on Kravitz.

Next it was Missy Elliot’s turn! The female singer/emcee had fans, old and young, out of their seats jamming to “Work It!” Per usual, Elliot had the children behind her dancing! Honestly, it was a great idea to bring the two together because Elliot added an extra “pizzaz” to the entire performance!

Perry ended the spectacular performance flying over everyone while singing “Fireworks,” and fireworks going off over the stadium.

Overall, she did a fantastic job and happy that she was chosen! What are your thoughts? Comment below!

Check out the performance below: