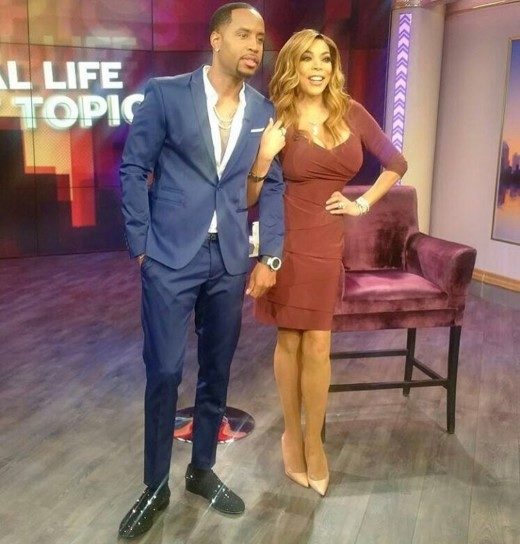 Safaree Samuels talks about Nicki Minaj in a new interview on ‘The Wendy Williams Show’! He claimed that Nicki owes him a big paycheck for his work on her last album before their 2014 split! Safaree sent her a direct message.

It seems like Nicki Minaj, 34, can’t stop the beef latley. Her ex, Safaree Samuels, 35, may be stirring up an impending dispute. When he appeared on The Wendy Williams Show, March 7, the producer claimed that he wrote “100%” of Nicki’s music with her when they were together. So, that means 12 years worth of music in a “collaborative effort,” between the two. Nicki and Safaree split in 2014. Yikes.

We can only imagine what a check for that amount of work would run Nicki. However, there’s only one issue with the whole story. Safaree claimed that nothing was ever put on paper, but she would “pay” him for helping her with any of the credit. So, any hours or actual contributions he put into the hit music that made her one of the best female rappers alive, was not documented once in the 12 years they worked together, according to Safaree. Wow.

During their 12-year romance and “collaborative” work environment, “She was the boss,” Safaree said. He told Wendy that although Nicki called the shots, “he had everything he dreamed of.” Wendy alluded to fancy material items, such as suits and things, being part of that “everything” Safaree spoke of. But, he didn’t elaborate.

Safaree was riding high in his relationship with Nicki, until her third studio album, Pink Print. Although the two had split by the time she recorded Pink Print, Safaree told Power 105’s The Breakfast Club back in Jan. 2015 that he was present when the songs, “The Crying Game” and “Bed of Lies” were recorded; songs that were oddly about the tumultuous issues of a relationship. He claimed to Wendy that Nicki didn’t pay him for those contributions as well.

When asked if he thinks Nicki is still a “good person,” regardless of what Wendy claimed she’s heard [which were negative things], Safaree revealed that Nicki’s camp apparently tried to stop him from appearing on the show. “She didn’t want me here,” Nicki’s ex said. Safaree ended his controversial appearance by sending a direct message to his ex, and it went like this: “Do what’s right. You know what I did. Do what’s right.”

Safaree’s candid interview comes as sort of a shock, seeing as he defended Nicki in her feud with Remy Ma, 36, just days ago on Feb. 28. Nicki and Remy have an ongoing feud that’s mostly been fueled by Remy, especially when she dropped a scathing diss track titled, “shETHER”. The song contained wild allegations, where she accused Nicki of getting butt injections, sleeping with Trey Songz, 32, using a ghostwriter and more. Safaree weighed in on Remy’s harsh lyrics when he said, “I ain’t gonna lie, credibility wise, it’s definitely some…it’s just a very disrespectful record,” to TMZ. “It’s probably the most disrespectful record I ever heard in my life.” So, what changed his tune?