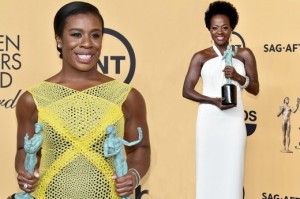 In her acceptance speech, Davis thanked Shonda Rhimes, producer of “Murder,” “Grey’s Anatomy,” and “Scandal, primarily “for thinking that a sexualized, messy, mysterious woman could be a 49-year-old dark-skinned African-American woman who looks like me.” Aduba humbly accepted her award with tears and visible shock as she thanked her family, friends, and all those involved. She also directly thanked her fellow cast mates, saying “without whom this is not possible. I love you guys so desperately so much.”

Congratulations go out to both these incredible actresses on their historical wins!