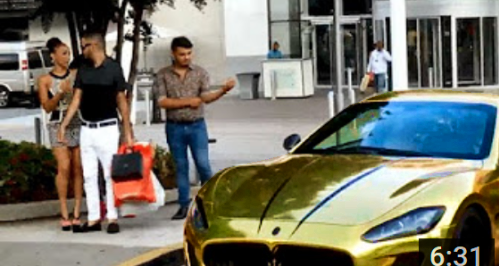 “That’s a shame how she was holding her boyfriend’s arm one minute and next minute she’s riding off with another guy Lol ! Gold Digger ?” 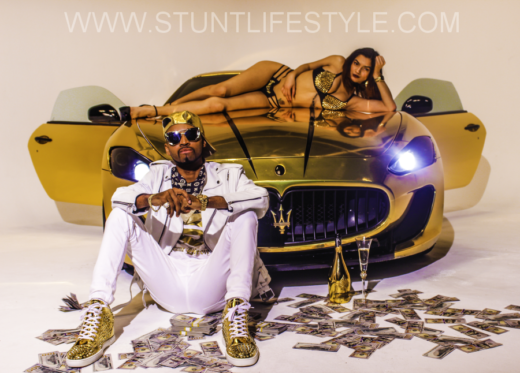 The Ghetto Slang Dictionary defines Stuntin’ as the following:

To flaunt one’s wealth, appearance or great skill; to floss or show off; to inspire awe or intrigue. In layman’s terms, Stuntin’ is wearing expensive clothes, jewels and ridin big to show that you have money to blow.

Slim Stunta, received his name from his peers because he was known for Stuntin’ like a major artist before ever releasing a single, let alone an album.”I just rolled with it,” Stunta states. “I represent for all the Stunta’s out there. I want to motivate people to get out and get it.” It takes more than ridin big, expensive clothes, money and the high lifestyle to master the art of Stuntin’. Slim Stuntin’. Slim Stunta has parlayed his catchy vocals and unique sound to implement a style that has definitely lived up to the hype.

Born into a family of entrepreneurs, professionals and musicians, Slim Stunta says, “I could have been a doctor or a lawyer but I chose to do what I love.”Raised in Atlanta, GA, Slim Stunta developed a passion for music early, as far back as he can remember. At the tender age of 12 he began writing songs and recording them on a tape recorder. He saved up enough money selling candy at school to purchase a beat machine and a microphone. That same day he made a beat, rapped over it and he’s been doing it ever since.

Now with his debut EP, “Stunt Lifestyle Vol 1”, and “Stunt Lifestyle TV”surrounding the release, he is already gaining major attention receiving over 12 million views on YouTube and Facebook alone. His viral social media presence landed him several offers and most recently to be featured on the internationally syndicated television Series “Rich Kids Of Instagram”.The show is currently airing all over the world and will be debuting in America soon. Slim Stunta notes that every song on his EP could be released as a single. “My music is a reflection of my lifestyle. For every emotion that I feel there is a song to bring it out,” says Stunta, matter-of-factly. “I make music that makes you feel good.” His first single “I Can Take Your Girl” is already going viral online receiving over 2.2 Million Views.

Slim Stunta doesn’t consider himself just a rapper. “I am an entertainer and entrepreneur. I want to open doors for other people. It’s bigger thanme.” says a confident speaking Stunta. He has also opened a string of other businesses and most recently the “Stunt Lifestyle Brand”, an exclusive brand featuring contemporary apparel and accessories. Slim Stunta also has Foundation(www.Blessthegame.org)” Slim Stunta believes he canhelp and influence others in his generation. Considered a force to be reckoned with, Slim Stunta will definitely soon have the whole world taking a double look to see what Stuntin’ is all about.