Wanda Sykes Had Both Breasts Removed To Stop Cancer 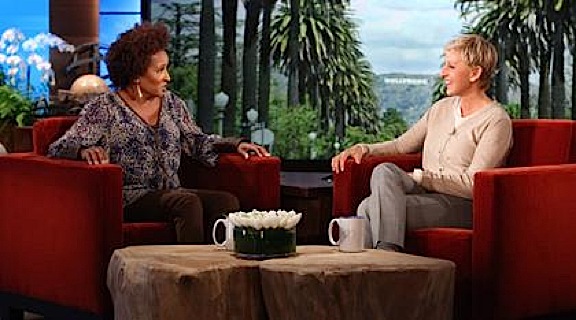 Wanda Sykes recently broke some amazing news on the Ellen DeGeneres Show, the comedienne told the host that she had both breasts removed in double mastectomy operation. Originally planning to get a breast reduction, her tests came back positive for stage 0 breast cancer, so she decided to have both breasts totally removed. The show airs on Monday, be sure to watch.

Â “I don’t think anybody knows about this. You just went through something very, very serious and you’re going to talk about for the first time,” Ellen DeGeneres says to Wanda Sykes on Monday’s Ellen show.

“I had breast cancer,” says Sykes. “Yeah, I know it’s scary. It is. I found it through … I was having a breast reduction, actually.”

It happened in February. “I had real big boobs and I just got tired of knocking over stuff. Every time I eatâ€¦Oh lord. I’d carry a Tide stick everywhere I go. My back was sore so it was time to have a reduction,” says Sykes.

After the surgery, in the lab work, doctors found that Sykes had “DCIS in my left breast. I was very, very lucky because DCIS is basically stage zero cancer. So I was very lucky.”

She was told she’d need to have it checked every three months. “But, I’m not good at keeping on top of stuff. I’m sure I’m over due for an oil change and a teeth cleaning already. I have a lot of breast cancer history on my Mother’s side of the family, which I didn’t know about…”

So she made the decision “to have a bilateral mastectomy. I had both breasts removed and because now I have zero chance of having breast cancer. It sounds scary up front, but what do you want? Do you want to wait and not be as fortunate when it comes back and it’s too late?”

Sykes says she was reluctant to talk about it. “I was like I don’t know, should I talk about it or what. How many things could I have? I’m black, then lesbian. I can’t be the poster child for everything,” she says, laughing.

"The Geto Boys's," Bushwick Bill was hospitalized last night, Sunday June 9th. This morning sources say the dancer and rapper has passed away at...
Read more