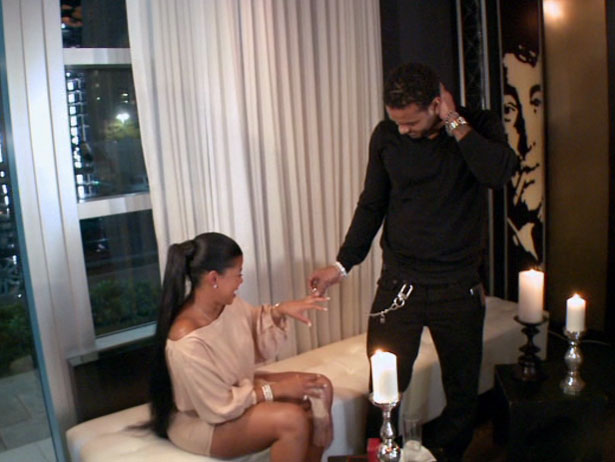 If you missed last night’s Love and Hip Hop, then you missed a great thing. We all know that Chrissy was having a rather difficult time with her boyfriend Jim Jones. Despite all of this, he finally proposed to her and the entire scene goes emotional. Watch videos and photos inside.From the record, Chrissy first bought Jim Jones a ring and proposed to him. He accepted at first but he lost the ring just a few months later. She bought him another ring. But she herself didn’t have a ring. He also appeared not to be too careful about his relationship so last night, Chrissy told him directly that she wanted him to be more present in their relationship and more emotionally available. She also said that she has started to feel like she needs some time away. She then took a girl’s party in Miami and started thinking whether or not he should move on from the relationship.

But Jim Jones appeared at the party freaking Chrissy out. While she started blaming him for being crazy and showing up in Miami like a “f*cktard,” Jim told her that he’s about to show her how crazy he is before pulling out a ring box to propose to Chrissy.

And then, Chrissy got emotional and burst into tears. Watch video of this below:

Get More: Love And Hip Hop

What do you think? Sweet or odd?