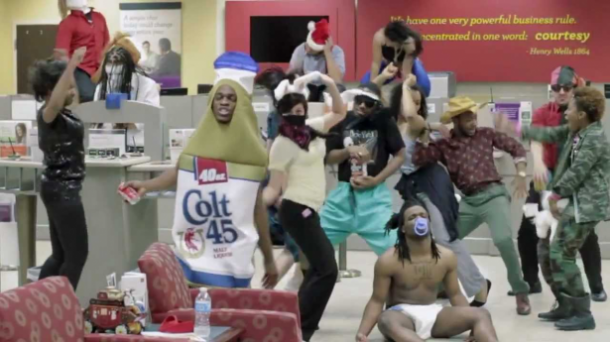 The BIG HOMIES Emmanuel & Phillip Hudson knows how to create some buzz and now they got the Buckhead Branch of  Wells Fargo feeling the pain and denying their association with the HARLEM SHAKE VIDEO that has since gone viral on YOUTUBE.

A spokesperson for the Buckhead Branch of Wells Fargo says the bank does not approve of a Harlem Shake video shot inside it’s Atlanta location.

More than 140,000 people have viewed the video on YouTube. It features a man in a ski mask dancing in the lobby of a Buckhead Wells Fargo branch.

Moments later, the man is joined by dozens of dancers in costumes.

There are countless examples of the dance craze posted on online websites, including the Georgia Aquarium and UGA students.

But a Wells Fargo spokesman says the bank employees filmed the video after hours and doesn’t believe it’s consistent with the corporate image the bank is trying to project.

“This was something that our team members participated in on their own time. It was not approved by the company and Well Fargo did not produce the video.”

Now I approve of being TURNT up but please please please don’t lose your job by acting up. LOL at the Shennanigans. Be sure to check out our homies Emmanuel & Phillip Hudson’s Youtube page and the big things that’s popping over at Archive Entertainment.

Spotted on the News.

A group of students in their last year at Clark Atlanta University (CAU) can rest a little easier about their school finances thanks to...
Read more
African American Issues

D’Angelo Russell burst on the scene all the way back in his High School days at Montverde Academy in Montverde, Florida in his sophomore...
Read more
Atlanta

Reginald Greene is your answer to a personal injury

Reginald Greene known as the Super Lawyer is your answer to any personal injury, slip and fall or tractor trailer accident. I'm sure you...
Read more