More
Home Uncategorized What Would You Do If You Saw The Stripper Mobile On Your...
Facebook
Twitter 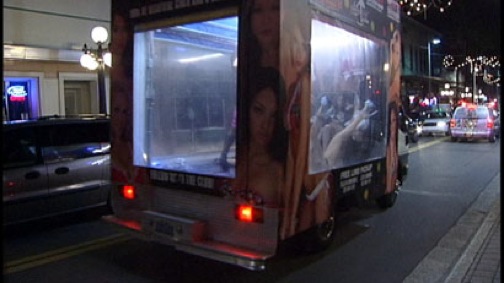 I really don’t know how I would feel if I was driving down the street and saw strippers dancing on a truck and had my 5 year old child in the car(I don’t have any kids just saying). I think for the most part I would be lost for words or either in an accident trying to cover their eyes LOL.

DÃ©jÃ  Vu, a gentlemen’s club located in Tampa Florida , has started driving what it calls the “Stripper Mobile” around town. The “Stripper Mobile” is a large truck with Plexiglas sides featuring a stripper pole and dancers inside, sort of like a peep show on wheels.Â Reaction so far, according to DÃ©jÃ  Vu dancer Bree, has been crazy.

“Everybody’s taking pictures and running up and screaming and trying to get on the bus and throwing dollars outside. It’s actually very exciting,” she said.

The “Stripper Mobile” was originally driven in Las Vegas until local leaders there put the brakes on the vehicle last November. The owners eventually sent it to Tampa, where DÃ©jÃ  Vu’s general manager says they’re taking it out on Friday and Saturday nights between 10 P.M. and 2 A.M..

I was told the truck smells like dead fish and Â hot A$$ and the end of the night. LOL

“We have had a few frowns here and there, but for the most part it’s all thumbs up,” he said.

The city’s director of code enforcement tells 10 Connects the vehicle does not violate any city ordinances, as long as the dancers keep their clothes on. He adds so far, they have not received any complaints either.

So what do the dancers do while driving around town?

“We dance on the pole, we wave, we shake our butts on the floor, do pole tricks and stuff like that,” Bree said. But she stresses they do keep all their clothes on.

Of course the goal of the “Stripper Mobile” according to Bree, is to attract customers to the DÃ©jÃ  Vu.