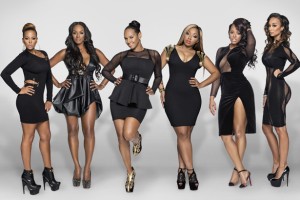 The ladies of “Basketball Wives: LA” Season 3 came together last night for their reunion. It was a tense episode, from the tears, fights, and engagement…yes, someone gets engaged folks!

I don’t know about you guys, but “BBW: LA” girls brought the heat last night. The show opens up with everyone introducing themselves BUT Draya. She decided that it would be better if she did her filming separately from the other ladies. As we all know, things have gotten so heated between the cast members, Draya felt that it would be smarter to not mingle with the girls that night. Throughout the episode viewers are directed back to Draya’s one on one with Shaunie. She speaks about how she really felt about her and Jackie’s friendship or the lack there of, and the fight between her and Sundy. If anyone forgot, a physical alterction took place between Draya and Sundy during a Palm Springs getaway, which left Sundy with a black eye. Draya openly admits to having the intentios of fighting and handling whoever decided they wanted to pop off.

Back on the stage, John Salley got right into by rolling the clip of everyone’s first awkward encounter with each other and addressing the season long beefs. A highly talked about one, was everyone’s issue with Jackie. The stage was definitely separated – Brandi and Malaysia VS. Jackie, Sundy, and Brittish. Now, the most heated fight of the night goes to Brandy and Sundy. These ladies came out the gate with the bashing of each other’s character.  It got so intense, that security, crew members (of the show), castmates tried to stop the argument from escalating. It was even crazier because some audience members tried to jump into the fight that was about to take place. Eventually, it was decided that the rest of the show would be filmed separately. Maylasia and Brandi spoke their peace, then the next group of ladies.

There was a positive side to last night’s fiasco. Brittish and fiance, Lorenzo, had a moment to talk about their relationsip. Initially, Lorenzo was brought on stage to address the cheating scandal, but it was dimissed. The discussion ended with him on his “good knee,” as Salley noted, proposing to Brittish with a BIGGER rock.