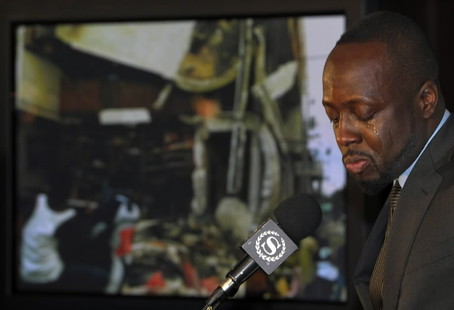 Wyclef Jean has been on Twitter for the past 24 hours angrily pushing back against rumors that he is stealing funds from his Yele Haiti charity group, and that he used funds from the organization to pay an alleged mistress a six-figure salary.Â Zakiya Khatou-Chevassus, the alleged other woman, was paid $105,000 as an independent contractor, working for the charity in 2008..

â€œShe worked for Wyclef on all Wyclef matters,â€ an unnamed source told the Web site. â€œShe did whatever Wyclef needed that day, whether it was related to Yele or not. She would do things like book flights, and she wasnâ€™t very good at it. Itâ€™s a shame that she made that much money.â€

Though she reportedly acted as the singerâ€™s personal assistant, Khatou-Chevassusâ€™ salary was more than three times what Yeleâ€™s program director received, and the two were said to be romantically involved, Gawker reported.

â€œEveryone knows they were in a relationship,â€ said another unnamed source. â€œA dozen people, including me, saw and knew. It wasnâ€™t a secret.â€

The multi-platinum rapper, who is married, was recently found with naked pictures of his manager on his cell phone.

As for his Yele Haiti drama, Wyclef has been accused of misappropriating funds â€” allegedly paying $410,000 to his own companies, and spending $250,000 on advertising with a Haitian television station that he co-owns. He is also said to have charged his foundation $100,000 to perform at his own charity event.

Wyclef has yet to make a statement regarding the accusations, but he fired off the following tweets last night: