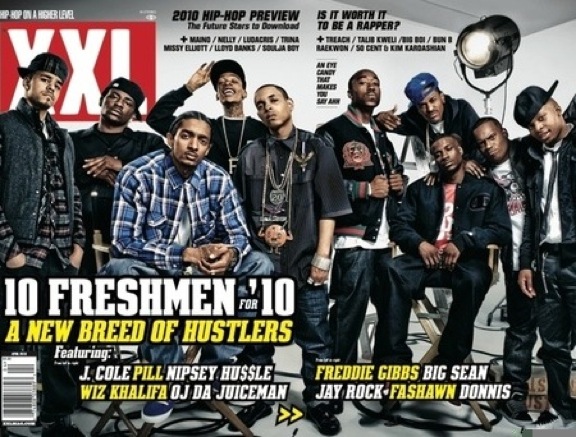 Some of the hottest up and coming names in the world of rap will be appearing in the upcoming issue of “XXL” magazine. If you are a HIP HOP HEAD, you should WANT this issue. Earlier this week the publication announced its list of the top ten freshman rappers of 2010. This year’s collection features a wide array of emcees, with talented rappers from coast-to-coast appearing on the list. West coast artists Jay Rock, O.J. Da Juiceman, Nipsey Hussle and Fashawn made the list, as did Pittsburgh’s Wiz Khalifah. Pill, Donnis and the FLAME spitter J. Cole are holding it down for the south, while Big Sean and Freddie Gibbs represent the midwest. “XXL’s” Editor in Chief Vanessa Satten says each year’s class is completely DIFFERENT, telling MTV News that the 2010 group is, quote, “a little bit more street” than 2009. “XXL’s” ten freshman of 2010 issue will be on newsstands March 16th. Looks like we got a new line up for the Leaders of the New School. Do yall think these cats are really DESERVING of the freshmen of the year title?