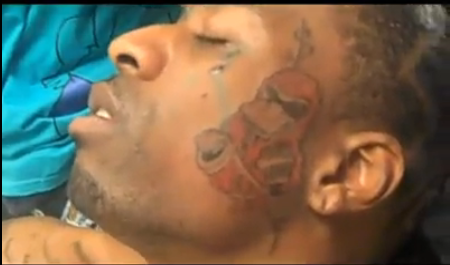 Yung LA released a video on World Star Hip Hop to show off his new tattoo of Darkling Duck on his face. However, during the video segment Young LA revealed that he was no longer with Grand Hustle what!!!!Â
According to Yung LA, he has has nothing but respect for the label and all of the artist on it but he has to do what’s right for him.
Now, the kicker is, he did mention possible work with Young Money. Could Wayne be picking him up and adding him to the crew? Anyuthing is possible especially since Yong Money added T-pain to their camp earlier this year.Â  I wonder how Tip feels about this, hmmmm! If you were on twitter you saw that some of Grand-Hustle did not have anything nice to say about him. Infact they said that he was on drugs really bad and needed help … We are reaching out to Yung LA to see if we can get a comment… Click Here To See The Video!!!.