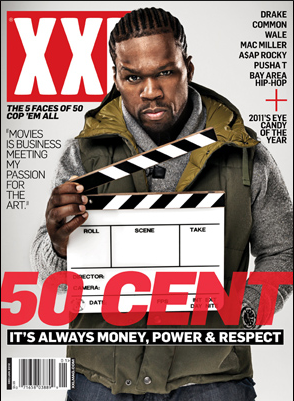 XXL’s End of the year issue features the 5 Faces of 50 Cent in honor of the superstar Â fifth album as well as an EP coming this January.

50 Cent released his first mixtape titled “50 Cent is the Future” 10 years ago which some say proved that 50 Cent actually is the future of this game?

Over the years, he has expanded his brand way beyond just a hip-hop artist. The magazine comes up with 5 faces of him and introduces them in five different covers. The five faces of Fifty are The Rapper, the Actor, the Businessman, the Philanthropist and the Bad Guy!

However, in the Bad Guy cover, 50 appears with his good friend and current Welterweight Boxing Champion Floyd Mayweather.

See the five faces of 50 cent in the gallery below.

The issue with 50 on its cover also has several stories with Common, Mac Miller and the new-age Bay Area rap scene. It also compiled a list of 10 best books written by a rapper, an interview with Drake, a review of Take Care and a lot more about the hip hop community.

If you are a hip-hop fan, or if you’re in the hip hop community already, you should check out the December/January 2012 double issue of XXL.