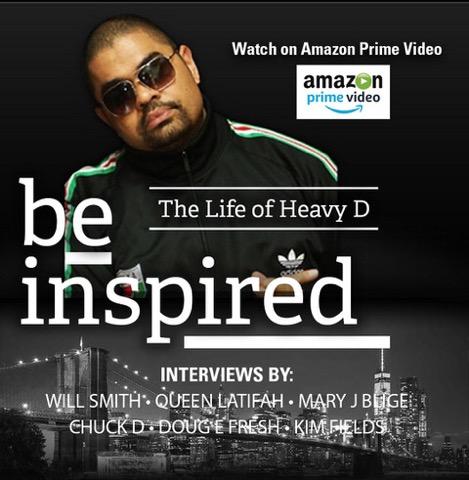 On May 24th 2019 the late Dwight Arrington Myers aka Heavy D would have been 50 years of age. Gone too soon due to a pulmonary embolism the Hip Hop World was shook. Gone was one of the few Hip Hop Pioneers who actually was a ray of light, a pillar in the Hip Hop Community and moniker was to spread inspiration through his music and even in the advice and person interest he took in his friends personal problems.

Amazon Prime Video released a documentary  “The Life of Heavy D – Be Inspired” a video documentary is now available for download on Amazon Prime Video. Originally recorded in 2012 featuring interviews by Will Smith, Queen Latifah, Mary J Blige, Chuck D, Doug E. Fresh, Kim Fields, DJ Eddie F, Kool Moe Dee, Brett Ratner, MC Lyte and others. In the documentary Queen Latifah talks about what Heavy D was the first to do for her when she was 18 years old. Will Smith mentions how Heavy D was the first to embrace DJ Jazzy Jeff and the Fresh Prince into the world of Hip Hop.

Friend to the site, the Producers Channel TV got a chance to catch up with 3 of Heav’s close personal friends to find out what stood out in their mind when awakening on May 24th and reflecting on the past memories of their beloved friend Dwight Arrington aka Heavy D the self proclaimed “Overweight Lover.”

“the first thing to come to mind was “cereal, greatness, determination, and I get so inspired to be the best. “

“Heavy D’s style combined with his dance moves made Hev the original big sexy; and he inspired big men all over the world.”

Last but not least we call Heavy’s beloved DJ and creator of the group “Heavy D and the Boyz” and DJ Eddie F said the following:

“Heavy was not only super talented, he always expressed love and positivity throughout his career, music, and everyone’s life that he touched.”

The Amazon documentary will feature stories from his family and other golden-era artists such as Doug E. Fresh, Big Daddy Kane, and Kurtis Blow. Also included will be performance footage, including Heavy’s last televised performance at the BET Hip-Hop Awards on October 11, 2011.

It seemed only fitting to title the documentary after Heavy’s last social media post, “Be Inspired.” This marked our final inspirational quote we would receive from our beloved brother Heavy D. We got nothing but love for you Heavy. The Life of Heavy D – Be Inspired is now available for download Amazon Prime Video .