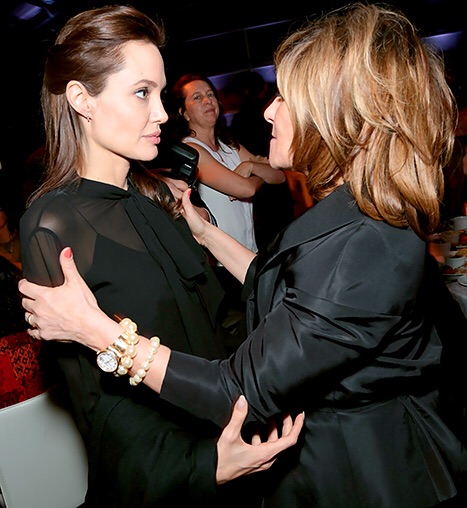 Sony execs are catching backlash over their leaked emails where they are bashing a few actors, actresses, and etc.! One person to respond to the insults was funny man Kevin Hart. Next it is actress and philanthropist, Angelina Jolie! However, her response was in the form of a very chilling stare down!

I’m telling you if looks could kill, Sony Pictures Entertainment co-chairwoman Amy Pascal would be six feet under now! Pascal was caught saying not-so-nice things about actress and philanthropist Angelina Jolie upon the leak of internal emails released Monday in which she was referred to as a “spoiled brat.”

The photo heard ’round the world was taken Wednesday morning at The Hollywood Reporter Women in Entertainment Power 100 Breakfast. Now when you look at the picture quickly, you may not immediately notice it but there is a look of disgusted annoyance in Jolie’s eyes. Pascal’s hands are on Jolie’s arms and the look on her face actually seems to plead for forgiveness!

Apparently, there was a discussion in the emails between Pascal and producer Scott Rudin over Jolie’s choice of a director in a movie she was set to star in. The movie seems to be described as a “Cleopatra movie” and she wanted director David Fincher to take the reigns but Rudin wanted Fincher for his biopic on deceased Apple co-founder, chairman, and CEO Steve Jobs.

Rudin emails Pascal “YOU BETTER SHUT ANGIE DOWN BEFORE SHE MAKES IT VERY HARD FOR DAVID TO DO JOBS,” obviously frustrated with the prior email in which Pascal says that Jolie “wants to talk” because “she is upset.” Rudin goes on to say that he would not “destroy” his career “over a minimally talented spoiled brat who thought nothing of shoving this off her plate for eighteen months so she could go direct a movie.” He further added, “I have no desire to be making a movie with her, or anybody, that she runs and that we don’t. There is NO relationship with any movie star – ANY one – that requires our willingness to prostrate ourselves this way in the face of childish, irresponsible, willful and un-partnerly behavior.” OUCH! Now while Jolie has yet to comment on Rudin’s blasting of her in these emails, this picture shows that she’s probably not happy with what was said in any way, shape, or form!

What are your thoughts on this part of the leaked Sony emails? Do you think Jolie will eventually release a statement or quietly cut her ties with Rudin?