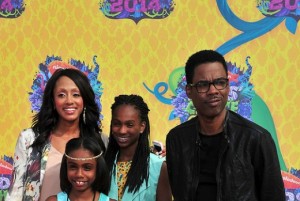 Comedian and actor Chris Rock has asked the court for shared legal custody of his daughters with now-estranged wife Malaak Compton-Rock. Click the link for details.

TMZ reports that comedian and actor Chris Rock claims that his estranged wife of 18 years, Malaak Compton-Rock, has been “preventing him from seeing their 2 daughters [12-year-old Lola and 10-year-old Zahra] on a regular basis.” As a result, Rock has petitioned the court to grant him and Compton-Rock shared custody of the girls.

The divorce papers were filed in New Jersey December 23 and in that documentation, it appears that the two had been discussing their separation since at least November. TMZ says that in November, the pair had already “identified all the community property to be split up once they divorce.”

Honestly, I just hope that these divorce proceedings do not turn ugly and that they are able to do this relatively quietly and respectfully especially since they do have children together and such a long history.