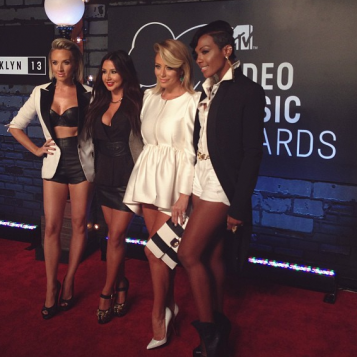 First N’Sync, then Eminem, and now Danity Kane is making their comeback debut at this year’s VMAs!

The group made their fans go wild when they announced that they were officially back on the show’s red carpet pre show.

The group has been publicizing their return like crazy since they unleashed a promo picture on their instagram page, and it looks like the group may also debut a new song, since they’ve been using the hash tags #VMA2013 and #Rage in their tweets.

If you notice, D Woods is not pictured. The singer previously said that she would not be apart of any DK reunion, and it looks like she’s not going back on her road.

At any rate be sure to look out for Shannon, Aubrey, Dawn, and Andrea in the very near future!