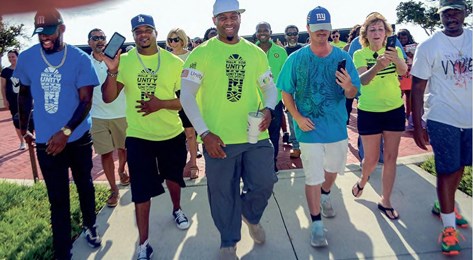 Reggie Dee , DJ / on air personality at West Palm Beach’s WMBX 102.3 fm walks with a purpose. The first time was walking against racism back in 2015. The walk against racism got national attention, from Steve Harvey on his morning show. Reggie Dee is the street correspondant for the syndicated show in the West Palm Beach Market. After 5 states and 30 days, Reggie Dee feels like its not enough we need more unity as a people. He’s taking his positive vibes and walking cross country again; this time 9 states , 90 days , 3,300 miles. Read about the mission and how to join the steps in unity movement.

On August 11, 2018 he began the steps to bringing the nation together one step at a time. He began the walk at the Dr. King memorial in West Palm Beach, Fl. Reggie Dee says, “This walk is about him,” he said pointing to the statue of King behind him. “He had a dream, and we are here to make that dream come true!” he said, as supporters crowded around him. “This is about bringing people together from all walks of life for a positive cause.”

The walk serves as two purposes one to get fit and the other which is the most important to Reggie Dee is to bring peoeple together. He would love for everyone to take steps for unity together.  He made it in 2015, with the support of many sponsors, people walked with him along the way, and even met him in different cities.  This time it’s more about bringing us all together.  “The racism walk was inspiring, but this one has even more of a positive connotation,” Dee tells the South Florida Times. He adds, “Yes, this is about publicity, but this is not a stunt. The big picture is unity. I’m building a huge database and I’m asking the people to join me. Walk a mile, walk a day, a week, whatever you wish. Take steps around your neighborhood, on your job. Just join me any way you can.” he urged.

For more information on how you can join Reggie Dee on the Walk for Unity, visit the webiste  https://walkforunity.com/ .  Follow Reggie Dee on social media @reggiedeez ; where he keeps you updated and motivated along the way. We should be motivated him,  but I guess us coming together would be just the motivation for him to make it to Seattle, Washingon.