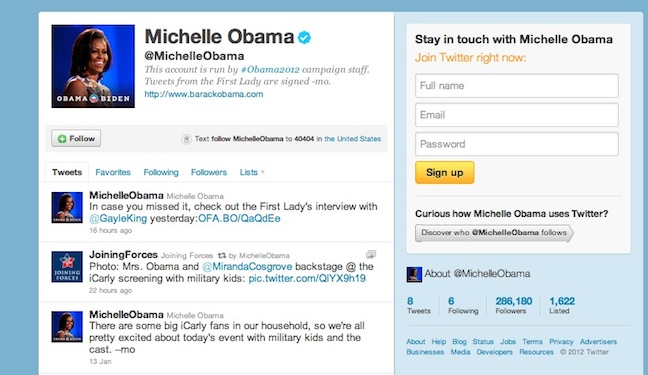 First lady Michelle Obama joined the Twitterverse this week with the handle @michelleobama. Â In the first 24 hours Michelle gained over 250,000 followers.

The #Obama2012 campaign staff launched Mrs. Obamaâ€™s Twitter account Thursday but have stated that they will be making the updates, except ones signed â€œ-moâ€, which will be from the first lady herself. Â Here are her first tweets...

“Hi, every one, and thanks for the warm welcome. Look forward to staying in touch with you here,” Obama tweeted Thursday in her first message from Michelle Obama. Later on, Obama tweeted about the Mar tin Luther King Jr. Day of Service, a day of commu nity and neighbourhood service she called “near and dear to my heart.”