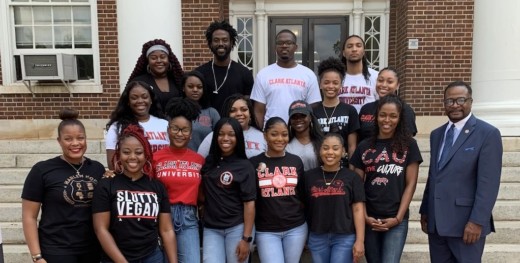 The two entrepreneurs, who both attended Clark Atlanta, teamed up to pay off the remaining balances of 30 CAU seniors! In an interview with Atlanta’s 11 Alive news, Cole explained that she could relate to the stress of student financial issues. “I’ve been in that situation trying to figure out how you’re gonna pay for school and if it weren’t for me becoming Miss Clark Atlanta University, I might not have been able to graduate.”

Cole and Lee met with the students on campus at Harkness Hall to deliver the good news. The students were so surprised that some of them were moved to tears. Lee told 11 Alive that she believed the students “were genuinely happy” about the assistance. She also mentioned that she hopes “they will pay it forward also.”

Cole, who helped CAU junior Khalil Perry earlier in the week with his tuition, said that the biggest reward of giving back to these students are their reactions because she says “they’ll remember that people came together to help and support them in achieving their dreams.”

Does this inspire you to find a way of your own to give back to your community? Share how you plan to help others in the comments below!