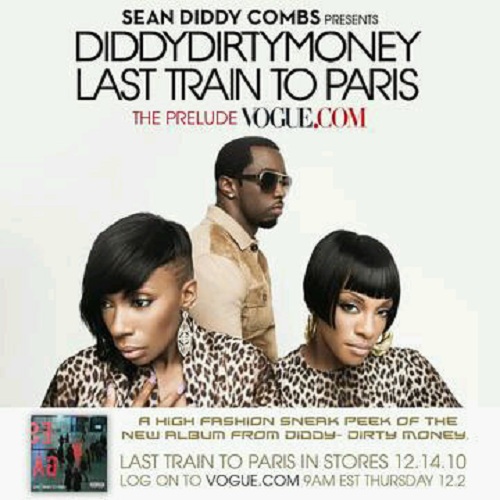 Is Vogue really ready for a mixtape run?Â  â€˜Cause I can definitely see a Vogue Heavy in the Streets Mixtape hosted by DJ Scream & Isaac Mizrahi.Â  It could be the Target Edition.Â  You know with the gunshots in background and the HOODRICHB*TCH tag line.Â  Or maybe even a Vogue GANGSTA GRILLZ Mixtape with Young Jeezy hosted by Marc Jacobs.Â  Talk about a comeback!!Â  That would put Trap or Die 2 to shame!Â  I wonder ifÂ Last Train To Paris PreludeÂ MixtapeÂ will be on the front page of Livemixtapes?Â  Maybe even a mixtape trailer on WSHH.

I must extend a SUPER SHOUT OUT TO DIDDY, because heâ€™s the ONLY person that could have pulled off an officialÂ “Vogue Mixtape” with drops fromÂ people that have probably never heard a real one.Â Â Â  Make sure you check out the Last Train to Paris Prelude/Mixtape hosted by Marc Jacobs, Tommy Hilfiger, Zac Posen & Isaac Mizhari.Â  And I canâ€™t forget…I wanna give a big shout outâ€¦to my home girl Anna Wintour & my big bruh Andre Leon Talley! (In my DJ Drama voice)