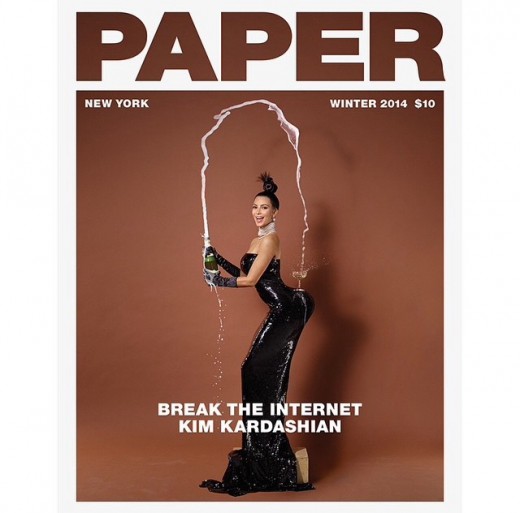 Kim Kardashian has found another way to make jaws drop everywhere! The reality star attempted to #BreaktheInternet with a provocative photo shoot for Paper Magazine, and let’s just say she succeeded!

Well Kim Kardashian’s hind parts are making headlines…AGAIN! However, this time people seem a bit more up in arms about her latest “bare all” project. Mrs. West was featured on the cover of Paper Magazine’s Winter issue, and it has done exactly what it was intended to do – “Break the Internet!” One of the picture that is causing such an uproar is one of Kim K playfully looking over her shoulder, as she holds her dress just below her oiled butt cheeks. The magazine thought it would be cool to recreate French photographer Jean-Paul Gode’s iconic image “Champagne Incident” using the ample bodied reality star as their muse and they were right!

For our winter issue, we gave ourselves one assignment: Break The Internet. There is no other person that we can think of who is up to the task than one Kim Kardashian West. A pop culture fascination able to generate headlines just by leaving her house, Kim is what makes the web tick.

And tick it did! Fans, bloggers, and even celebrities couldn’t wait to hit the internet to put in their two cents. Some tweeters reacted lightheartedly, comparing Kim’s rump to a wet slide, a horse, and even glazed donuts. Naya Rivera, however, of the hit TV series “Glee” didn’t seem to find the photos funny at all. Rivera took to twitter to tell Kimmy exactly how she felt about seeing her bare bottom, and I must admit, it was particularly shady. “I normally don’t … but you’re someone’s mother,” the actress commented.

Ouch! Naya isn’t the only one who thinks the spread is a little trashy and uncalled for. The comments on Kim’s IG page range from people congratulating her, to pulling the “bad mom” card, to flat out calling her a trashy porn star. There have also been questions about Kanye. Why did he “let” her do it? Amidst all the nasty comments, no reaction could have been more important to Kim than that of her husband’s. And today, at 12:07 AM Kanye showed the world just how much he approved of his wife’s naked bod by tweeting “#ALLDAY” with an image of Kim’s cover attached.

Another reason people are a little confused by the hot mom’s decision is because IG allowed the photos to be posted. However, Rihanna’s entire page was SHUT down for her spread with Lui Magazine! Chelsea Handler in particular had a lot to say when she did a side-by-side post with her behind out in one pic, and Kim’s photo in another. She captioned it the photo with “can you believe more than 2 a** can fit on the same screen? Guess which one’s real. Your move, instagram.”

Check out the rest of the spread 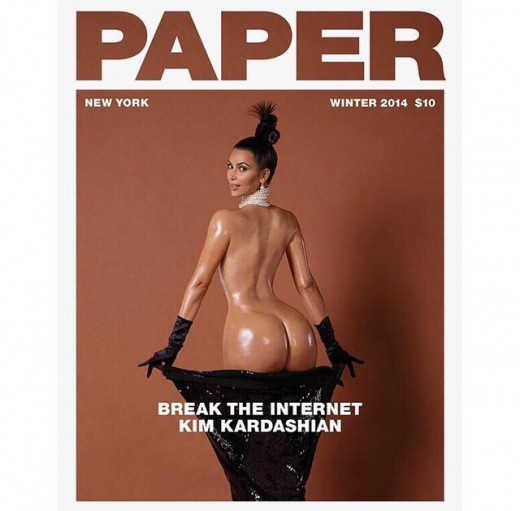 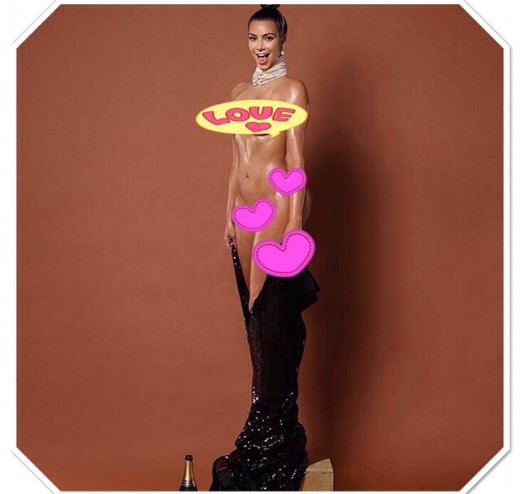 So, as the rest of the world recovers from the internet breaking, the Kardashian is probably at home with her husband, laughing as she cashes yet another check. My opinion? Yes, I’ll agree… I think we all are a little tired of seeing Kim K’s you –know-what. But she’s got a killer body, she’s sexy, and if not HER butt, then WHOSE? I can’t help but wonder if all the outrage and cries for morality are just a cover up for the Kim K haters to take a few more jabs at her, her marriage, and her career. What are your thoughts? Comment below!