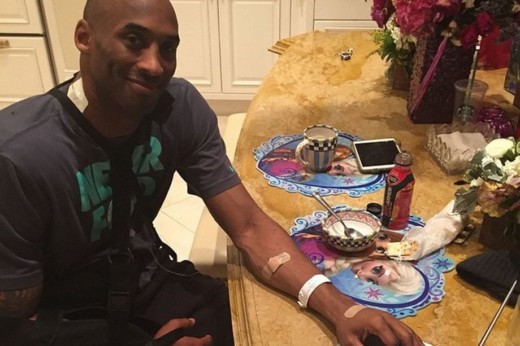 TMZ, CNN, ESPN, and ABC News have confirmed that Los Angeles Lakers star Kobe Bryant, 41, and his 13-year-old daughter Gianna have been named as two of the five people who died in a helicopter crash in Calabasas, California Sunday morning.

UPDATE: CNN reports Orange Coast College baseball coach John Altobelli, 56, his wife Keri, as well as his daughter Alyssa were among those who died in the crash.

UPDATE: A brief press conference was just held where it is believed that there were a total of 9 persons who perished in the crash: one pilot and 8 other individuals. Los Angeles County Sheriff Alex Villanueva says: “We are not going to be identifying anyone at this time. We have nothing to add until the coroner does their job. You will be notified in subsequent announcements.”

Kobe was a legend on the court and just getting started in what would have been just as meaningful a second act. To lose Gianna is even more heartbreaking to us as parents. Michelle and I send love and prayers to Vanessa and the entire Bryant family on an unthinkable day.

Kobe’s daughter Gianna Maria Onore — aka GiGi — was also on board the helicopter and died in the crash … reps for Kobe tell TMZ Sports. She was 13.

We’re told they were on their way to the Mamba Academy for a basketball practice when the crash occurred. The Academy is in nearby Thousand Oaks.

Kobe was traveling with at least 3 other people in his private helicopter when it went down. A fire broke out. Emergency personnel responded, but nobody on board survived. 5 people are confirmed dead. We’re told Vanessa Bryant was not among those on board. Eyewitnesses also tell us that they heard the helicopter’s engine sputtering before it went down. The cause of the crash is under investigation.

Low visibility may have been a factor in the crash, but as previously stated, the unfortunate incident is still being investigated. While the flames are completely out now, there is still smoke in the area. A small crowd of onlookers has quietly formed near the crash site.
ABC News reports:

There were no survivors in the crash around 10 a.m. local time Sunday, fire officials said in a press conference. The Sikorsky S-76 helicopter crashed under unknown circumstances, a spokesperson from the National Transportation Safety Board told ABC News.

As more details emerge, we will provide additional updates.

Kobe Bryant was reportedly killed in a helicopter crash in Calabasas, California, on Sunday morning along with 4 other