Ronda Rousey’s loss at UFC 207 might not have been shocking to hardcore MMA fans, since a year of being ghost after her last (and first) loss offered no insight to how she’d rebound. Tito Ortiz even earned a nice payday by betting against the former UFC women’s champ, either because he knew that Amanda Nunes is the real deal or Rousey was never going to be the same after she was exposed by Holly Holm, or both. 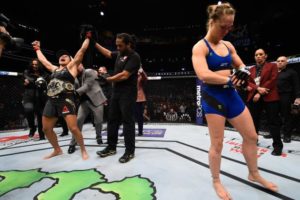 Nevertheless of who knew what, Rousey was KO’d faster than anyone could have forseen and so many people have layed on the jokes, memes, and insults, as if she’s not still the only reason why UFC’s women’s divisions exist in the first place. But not everyone is Nelson Muntz. While Nunes “blasted” Rousey for not being a real fighter and Michael “Venom” Page mocked her with a dance, as if he’ll finish his career with a perfect record, embattled former champ Jon Jones offered his public (or at least social media) support.

And like when Kobe Bryant came to the defense of the “true champion” after her first loss, LeBron James, always a fan of Rousey’s talent, told Akron Beacon Journal that he knows more than anyone what Rousey is going through right now.

“In sports, in general, they build you up as high as they can, put you on the highest mountain in the world, just to tear you down. That’s coming from somebody who has experienced it. And that’s exactly what she’s going through right now,” James told the Beacon Journal on Saturday. “That’s a fact. I know exactly how she feels because I was that athlete. I went through that.” 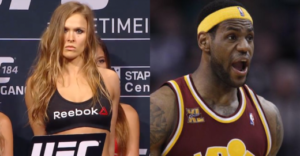 It’s important to understand that James hadn’t watched Rousey’s 48-second fight before he was asked about it. He doesn’t need someone to paint him a picture of Nunes painting Rousey’s face purple to know that she’s having a bad week.