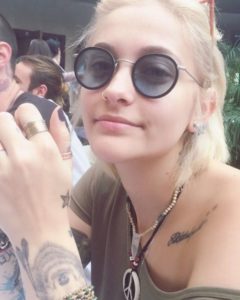 The daughter of the late Michael Jackson was once shielded from the public with masks, but the 18-year-old is going into 2017 with some high-profile gigs lined up. Paris reportedly met with Lee Daniels to discuss joining the cast of his new Fox musical drama “Star.”

Details surrounding her possible involvement are being kept under wraps, but Daniels teased fans last week by sharing an Instagram photo of him and Jackson together. “#whenpariscomestoyou …. talking talking talking,” he captioned the picture. Michael Jackson comedy pulled following criticism from familiy The outlet said Jackson is “seriously considering” joining the show.

During a September appearance on “The Ellen DeGeneres” show Jackson revealed that it was her father who made her want to go into acting. “My dad was in the movie ‘Moonwalker,’ and I knew he could sing really well but I didn’t know he could act,” she said. “I saw that and I said, ‘Wow, I want to be just like him.’ We would do improve together. He would give us little scenarios. He would go, ‘OK, in this scene you’re going to cry,’ and I’d cry on the spot.”

In addition to Jackson possibly joining “Star,” the famous teen has been approached by several agencies to become a high-fashion model. Jackson has reportedly already booked three magazine covers, with the first being released later in the month.
Last year, the King of Pop’s daughter made headlines when she did a steamy photoshoot with her 26-year-old boyfriend, Michael Snoddy, for Flaunt magazine. In one of the images, Jackson was seen kissing Snoddy as water pours down over their heads.