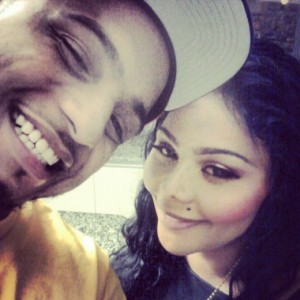 Nicki Minaj and Lil Kim have been at each other’s throats from the start. Now, Kim’s baby daddy may have prompted a whole new beef with his lusty Instagram post.

It’s no secret that Lil Kim and Nicki Minaj aren’t too fond of one another. The rap icon, better known as “The Queen Bee” has made it very clear that she thinks Minaj is a copycat. She claimed that Nicki jacked her style, and continues to do so, from the album covers, to the outfits, to the multi-colored wigs, Kim says that’s all HER. She said the beef started a few years ago when there were plans of Kim and Nicki doing a record together under Cash Money. She told The Breakfast Club that that’s when things went left, calling Nicki overrated.

Back in June of this year, however, Kim had to take some time out from the catfights to give birth to her very first child, whom she named Royal Reign. The 39 year old  was dating her baby father, New York-based rapper “Mr. Papers” at the time, but now it seems the two have split.

Yesterday, Mr. Papers posted a bootylicious pic of Ms. Minaj to his Instagram page with all kinds of emojis and thirsty comments. News of the post spread like wildfire after the Queen’s fans got word of it. Now people are questioning Mr. Paper’s motives. Is he a scorned baby daddy, or is he really just that silly? We get it. Nicki is HOT. But if you’re dating someone, just try not to hit on their enemies.

What do you think? Are Kim and her baby daddy done for good?