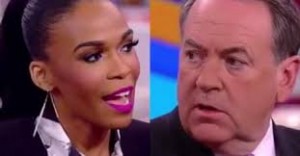 Grammy Award-winning singer Michelle Williams shared co-hosting duties with the ladies of ‘The View‘ on Thursday where presidential hopeful and former Arkansas governor Mike Huckabee was one of the show’s guests. Huckabee is the author of God, Guns, Grits, and Gravy in which he attacks global superstar performer and Williams’ fellow Destiny’s Child group member Beyonce for the sexually assertive songs included on her self-titled visual album.

Huckabee claims that he was appreciative of Beyonce’s talents but felt that some of her most recent music and performances were unnecessary. Here’s the excerpt from Huckabee’s book that has caused such uproar and controversy:

“Beyoncé is incredibly talented — gifted, in fact — she has an exceptional set of pipes and can actually sing. She is a terrific dancer –— without the explicit moves best left for the privacy of her bedroom. Jay Z is a very shrewd businessman, but I wonder: Does it occur to him that he is arguably crossing the line from husband to pimp by exploiting his wife as a sex object?”

Williams took the opportunity to defend her girl Bey stating “I just feel like that album and those songs, it was that one moment where she decided to probably do some songs she has always wanted to do. She had some freedom and she owned it and she took it.”

Watch the brief interaction between Williams and Huckabee below and don’t forget to post your thoughts on this in the comments section!