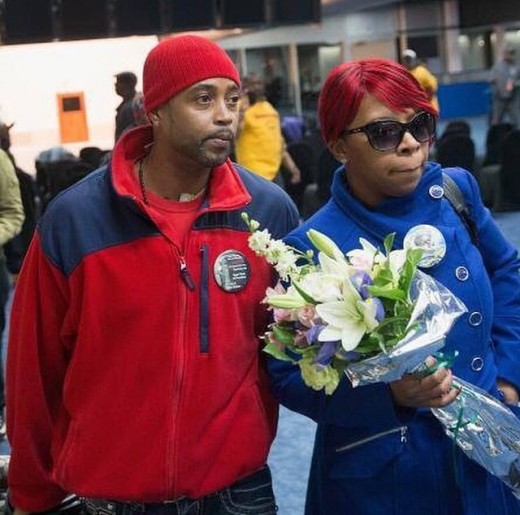 The smoke is clearing, and the dust is settling in Ferguson, Missouri after the grand jury decision in the Mike Brown case. Now, taking a break from policing riots, the Ferguson Police Department is now investigating Mike Brown’s stepfather, for inciting a riot. In the minutes after the grand jury’s decision not to indict Officer Darren Wilson in the murder of 18-year-old Brown, his stepfather, Louis Head, shouted into a crowd of protestors that they should “Burn this —- down.”

While even Head’s lawyer, Benjamin Crump agrees that his actions were inappropriate, he is asking that the public not criticize Head, given the huge amount of stress that the family has been under. While some would love to see an indictment against Head, others think the Ferguson police department has done enough already.

Ferguson police chief, Tom Jackson says they are looking in to the matter. “We are pursuing (an investigation into) those comments, and there is a lot of discussion going on about that right now,” he told Sean Hannity. “But I really can’t get into that right now.”

Lesley McSpadden, Mike Brown’s mother and Louis’s wife, still mourning, stands by her husband in response to possible charges for inciting a riot. “I say that that’s impossible. These things have been going on since August 9th, when it first happened.”
Since Head’s outburst, he’s released a statement apologizing for letting his emotions get the best of him.

Something came over me as I watched and listened to my wife, the mother of Michael Brown Jr., react to the gun-wrenching news that the cop who killed her son wouldn’t be charged with a crime.

My emotions admittedly got the best of me… I was so angry and full of raw emotion as so many others were, and, granted, I screamed out words that I shouldn’t have…. It was wrong and I humbly apologize.

Head went on to say that it would be wrong “to place blame solely on me for the conditions of our community, and country,” and said the grand jury’s decision was also to blame for the ensuing riot.
“I’ve lived in this community for a long time. The last thing I truly wanted was to see it go up in flames. In spite of my frustration, it really hurt to see that,” Head said.

We will continue to follow this tragic story, and we wish the best for Ferguson, and the family of Mike Brown.