Way to go Eagles! The Philadelphia Eagles beat the Tampa Bay Buccaneers in their first preseason game on of 2016 with the score 17-9 Thursday evening. Seems there was a big scare with the $40 Million dollar guard getting injured staggering into the locker room with a biceps injury midway through the first quarter Thursday. Immediately he took to social media to let everyone know he was ok in the following tweet:

In Atlanta Falcon news there was also a win for the Dirty Birds! This was an awesome pre season opening day in Football! Atlanta Falcons running back Brandon Wilds (20) also scored a touchdown against the Washington Redskins during the first half of a preseason NFL football game on Thursday, Aug. 11, 2016, in Atlanta.

Check out what was being said on twitter! We are so proud of our young buck! Way to go Falcons. Seems both birds were winning on Thursday! 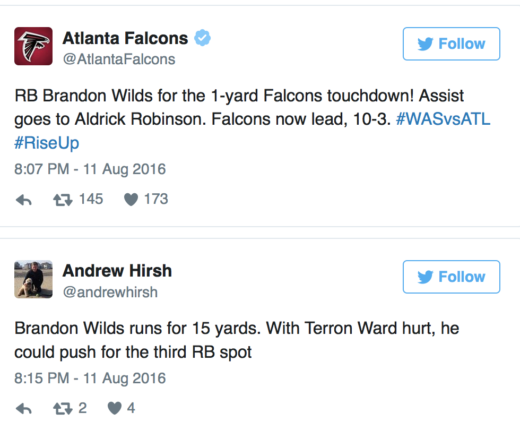 Stay tuned in to Freddyo.com for all your football updates!