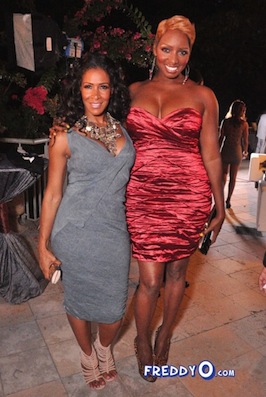 Nene Leakes appears to share some ideas comments about Shereé Whitfield during a recent video on her YouTube channel.

The Real Housewives of Atlanta cast member chatted with her friend, Basketball Wives star Jennifer Williams, about what’s been going on in her life, including her recent headline-grabbing breakup with a man she alleges scammed her. Nene asked Jennifer if she ever went to the man’s house and if she believed it was really his. “I went in the house, you see pictures,” Jennifer said. “I don’t know that you could stage a whole house, you know what I’m saying?”

Nene then seemed to throw a little shade at the RHOA ladies without naming any names. “Well, people do that. It happens on our show, they stage the house,” she said. “They never even lived in the house, they’re over there staging, changing pictures.”

Jennifer mentioned that she even went to a party with him at Shereé’s house, with whom she said “he’s cool.” “That’s interesting,” Nene said in response. “So he’s a con artist that Shereé knows.”

Nene had many other questions for Jennifer about her ex’s relationship with Shereé: “Did you go to Shereé’s? Was she cool? She was nice? She didn’t think anything of you being with John Doe? You think she knows that he’s a con artist?”

Nene finally concluded, “Wow, we might need to call Shereé.”

Well, Nene and Jennifer can save their time and energy, because Shereé has already gotten word of their conversation, and she doesn’t sound too pleased. “Over the past few days I’ve received an influx of calls and text about some interviews that my name is brought into,” Shereé wrote on Instagram on May 4. “I typically don’t indulge but… what’s good @neneleakes and @jenniferwilliams.”

Over the past few days I’ve received an influx of calls and text about some interviews that my name is brought into. I typically dont indulge but… whats good @neneleakes and @jenniferwilliams

This latest drama between the Georgia Peaches is very reminiscent of Season 10 of RHOA when Nene alleged that Shereé’s boyfriend at the time, Tyrone Gilliams, was a “con artist. Of course, Tyrone was also at the center of their huge blowup in Season 4 in which Nene uttered the iconic line, “I am very rich, bitch.”