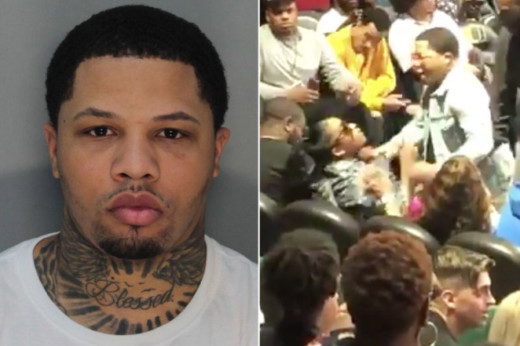 Lightweight championship boxer Gervonta Davis turned himself in to Coral Gables Police on Tuesday after cell phone video surfaced showing him getting into physical altercation with his baby mama in Miami. Davis is charged with Simple Battery Domestic Violence and transported to TGK for processing. Davis grabbed his former girlfriend by the neck and pulling her out of her seat. She is also the mother of his child.

“I never once hit her,” Davis wrote. “Yea I was aggressive and told her come on … That’s the mother of my child. I would never hurt her.”

The Baltimore native has amassed a 23-0 record — including 22 knockouts — en route to winning the World Boxing Association lightweight title on Dec. 29 in Atlanta with a 12th-round knockout of Yuriorkis Gamboa. The super featherweight champ has also drawn comparisons to heavyweight great Mike Tyson due to his raw punching power and undeniable fan appeal.

A spokesman for Premier Boxing Champions, which manages Davis, declined to comment on his arrest, ESPN reports.