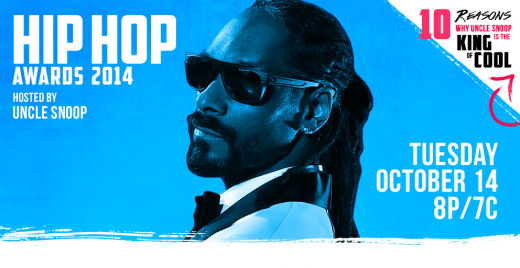 The BET “Hip Hop Awards” 2014 is all about legendary Hip Hop staring Uncle Snoop along with some of the biggest names in the industry. The big award show is going to be EPIC and it’s taking place in Atlanta this weekend.

Doug E. Fresh has served as a forerunner for hip hop culture for a whopping 29 years.   He proved to be a powerful force by 1985, with his dope rhymes, clever lyricism and extraordinary beat boxing skills.  Since then,Doug E. Fresh has respectfully been known as “The Human Beat Box” and “The World’s Greatest Entertainer.”

Taping of the awards show will take place at Boisfeuillet Jones Atlanta Civic Center in Atlanta, GA on Saturday, September 20, 2014 and will premiere on Tuesday, October 14, 2014 at 8:00 p.m. ET.  The “Real Husbands of Hollywood S2: Reunion Special” will follow directly after, at 10:00 p.m. ET.

Visit  BET.com/HipHopAwards the official site for theBET “HIP HOP AWARDS” 2014 where you get up-to-date info on this year’s show and take a look back on past BET Hip Hop Awards.

Stay tuned for more information because you know I am going to be there!