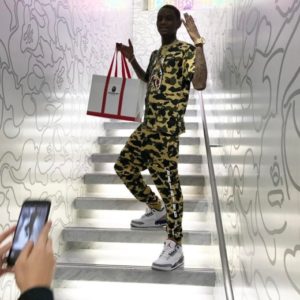 Law Enforcement reportedly told TMZ that a man busted down the front door of Soulja Boy’s Hollywood Hills home and stole $10k in cash and about $12k in jewelry. Soulja Boy apparently wasn’t home during the home invasion, but his house is heavily wired with security cameras, and an image of the intruder has reportedly been captured.

Cops were at Soulja Boy’s house most of Wednesday afternoon, and were still investigating the scene. However, they did say no evidence points to Chris Brown or his teams’ involvement in the invasion, especially coming a time where Chris & Soulja are prepping their boxing match.

I made myself a boss. Life lesson. Work more than you talk

For what’s worth, Game’s manager, Wack 100, believes the upcoming boxing match with Chris Brown is being controlled by West Coast gangs. While Chris begs to differ, it wouldn’t be shocking to hear Soulja’s home invasion be gang-affiliated.