T.D. Jakes To Be The Next Tyler Perry 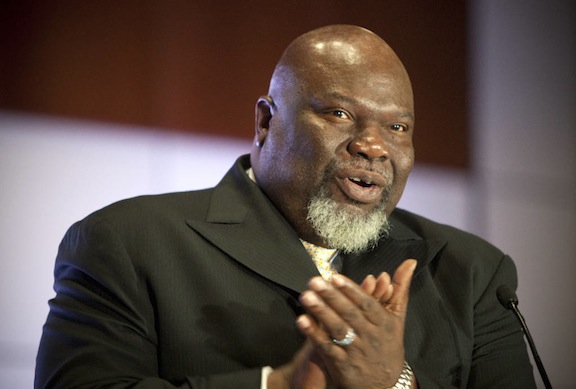 So now that â€œJumping the Broomâ€ was a hit, it has catapulted T.D. Jakes abilities as a producer to have Hollywood looking to him for their future projects. The preacher/movie mogul is moving forward to co-produce with former Fox Studios head Joe Roth, a new production for Sony based on a non-fiction book.

â€œHeaven is For Real: A Little Boyâ€™s Astounding Story of His Trip to Heaven and Backâ€ was originally written by Todd Burpo and Lynn Vincent and sold over 4.5 million copies. It chronicles the story of how Burpoâ€™s now 11-year-old son Colton took a journey to the afterlife after he died during an emergency appendectomy operation. But he recovered.

After coming back to earth, the young man told his family that he â€œwent to Heaven, actually looking down at the doctors operating on him and his family praying in the waiting room. And he slowly began telling them details about his miscarried sister, and his long-dead grandfather, none of which he should have known about. He then revealed to his family what it was like during his visit in Heaven, before he was sent back to his family.â€

As you know Beyonce just ink that big Disney deal to produced content for Disney Plus. Her first one is here called Black is...
Read more
Artist Collaboration

The first female Verzuz battle is going to be Erykah Badu and Jill Scott this Saturday, at 7pm est on instagram.  The ladies will be...
Read more