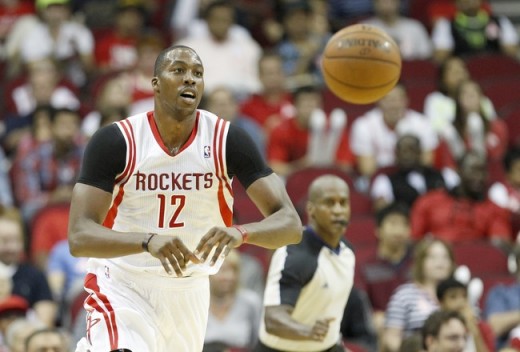 This year we need our man from Atlanta Dwight Howard to be playing in the All-Star Game. We get to vote our players in this year and we have the how to here. Click MORE for the details.

The man Dwight Howard needs our help. Houston Rockets ball playing center who went to high school at Southwest Atlanta Christian Academy chose to skip college in 2004 and go straight into the NBA and was selected first overall by the Orlando Magic. Eight time All-Star, Seven time All-NBA, Five time All-Defensive and three time Defensive Player of the Year. He’s ranked among the best every year in rebounds, blocks, field goal percentage and free throw attempts setting many records. Three division titles with the Magic plus a conference title. Won 2008 Slam Dunk Contest and was on Team USA as our starting center in 2008 for our gold medal. Played on Lakers in 2012 and is now playing for the Houston Rockets.

This years All-Star Game will be on February 15th at Madison Square Garden.

This year you can vote for the players you want to see on the court so we got to get our man Dwight up in there. Here’s How.

How to vote:
VOTE HERE

• The NBA.com ballot is available in 11 languages on NBA.com/asb. Voters can fill out one full ballot per day on NBA.com/asb from a desktop or mobile browser.
• Twitter voting allows fans to tweet a vote for 10 unique players each day throughout the All-Star balloting period. The tweet, retweet or reply must include the player’s first and last name or Twitter handle, along with the hashtag #NBABallot.
• Facebook voting allows fans to post a status from their personal accounts. The posts must include the player’s first and last name, along with the hashtag #NBABallot. Fans can post votes for 10 unique players per day.
• Fans can use Instagram to vote by posting an original photo and using #NBABallot and the player’s first and last name in the photo caption. Fans can vote for 10 unique players per day.
• Fans voting via SMS can text the player’s last name to 6-9-6-2-2 (“MYNBA”) on any wireless device. Fans can vote for 10 different players per day, per phone number via SMS voting by sending 10 separate SMS messages, each one with a different player’s last name. Message and data rates may apply.
• Fans can also access the ballot and vote through the NBA Game Time and NBA Game Time from Sprint applications, available on Android and iOS. Fans can fill out one full ballot per day.
Starters will be announced live on TNT on Thursday, Jan. 22, during a special one-hour edition of TNT NBA Tip-Off presented by Autotrader.com at 7 p.m. ET, featuring Ernie Johnson, Charles Barkley, Shaquille O’Neal and Kenny Smith. The special will air before TNT’s exclusive doubleheader featuring the San Antonio Spurs at the Chicago Bulls (8 p.m. ET) and the Brooklyn Nets at the Los Angeles Clippers (10:30 p.m. ET).
NBA All-Star 2015 in New York City will bring together some of the most talented and passionate players in the league’s history for a global celebration of the game. The All-Star Game
will air on TNT for the 13th consecutive year, as will the BBVA Compass Rising Stars Challenge on Friday, Feb. 13, and State Farm All-Star Saturday Night on Saturday, Feb. 14. The BBVA Compass Rising Stars Challenge and State Farm All-Star Saturday night will take place at Barclays Center in Brooklyn. Other events at Barclays Center include the NBA Development League All-Star Game presented by Kumho Tire and the NBA Development League Dream Factory presented by Boost Mobile on Sunday, Feb. 15, airing on NBA TV. Madison Square Garden will host Friday night’s ESPN-televised Sprint NBA All-Star Celebrity Game.