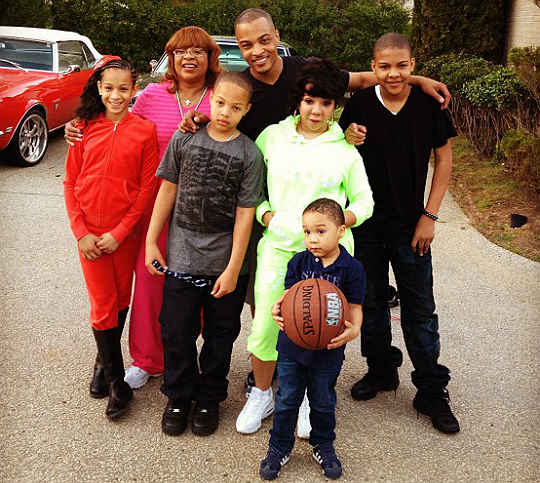 A Spring Break vacation has the Harris family packed up and headed west to L.A. on this week’s episode
of The Family Hustle. But before they could get going, a love-letter addressed to King has T.I. and Tiny
contemplating if it’s time for a “birds and the bees” discussion with their 8-year-old.

You just gotta love King. Last week he had Shekinah pulling out her tracks while baby-sitting the crew,
now he’s showing us how much of a “ladies man” he can be. The letter from his little girlfriend said she
loved him with all her “heat” (she misspelled heart, how cute) and if he did her wrong, she would kick
him in the balls. Sounds like a woman that knows what she wants out of life.

T.I. doesn’t think the letter is too serious since he’s still a little boy, but once the family reaches L.A. he
realizes that King might be growing up a little too fast, and has a father-son chat with, and the rest of
the Harris men. King just wants to love and be loved. We can already tell he’s going to take after his
Pops with his charisma.

Meanwhile the family enjoyed the sun and sand in L.A. by hitting the beach and some sight-seeing. And
of course T.I. and Tiny get all snuggled up during a sunset, and T.I. says he really loves L.A. and thinks the
Harris clan could take it by storm. Could he be hinting at a possible west coast takeover? We hope that
move wouldn’t be too perm, as we love the King of South here in ATL. Don’t get too Hollywood on us,
homie!

Did you watch last night’s Family Hustle episode? Do you think King is growing up too fast? Let us know!