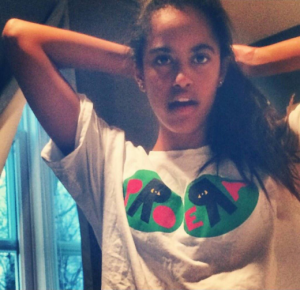 Remember that selfie of Malia Obama that made its way around the internet earlier this week? Yea, we do too. As suspected, the White House isn’t too happy about it, and frankly, President Obama is probably wishing that people would forget they even saw it. There is now a thorough investigation taking place.The photo that leaked on Monday, pictured Malia standing in front of the camera, lips parted, rocking a messy ponytail. The “controversial” photo mysteriously ended up on Pro Era’s Instagram page, which is the brand of the shirt Malia happened to be wearing. Though incredibly harmless, and very age appropriate, the issue White House staffers are probably more concerned about is the First Family’s security. Just HOW did the photo get into the slimy hands of the INTERNET? According to GAWKER, the photo was sent to Pro Era by a mutual friend of theirs and Maliah’s.

This is a big deal, since Mrs. Obama made it very clear in an interview with Barbara Walters 3 years ago that her daughters’ social media access is very limited.

“I still am not a big believer in Facebook for young people,” she said.

Whoever this mutual “friend” is better get ready for a thorough investigation. Something tells me he’s no longer welcome at the White House.