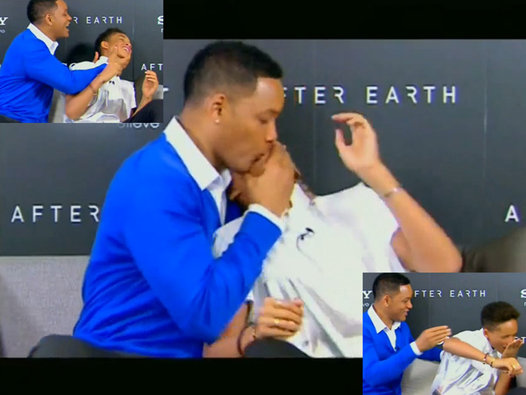 Will Smith recieves the most embarassing dad award this Father’s Day for kissing his 14 year old son Jaden Smith on live television.

Will Smith is so goofy and that extends into his parenting style. Will Smith and Jaden was out promoting their new film “After Earth” on Thai TV when an impromptu display of fatherly love took over Will and embarassed Jaden.

The segment took place during the Woody Talk channel earlier this month. The host of Woody Talk  Woody Milintachinda said he sensed some distance between the father and son in the movie. Woody wanted to know if there’s some tension in their father son relationship in real life. Will the ever clowning papa stated that the two are “very affectionate“, then he leaped upon Jaden and smacked a kiss on his mouth. Check out the video here:

What do you think about this open display of father and son love?

Do you think Will went too far by kissing Jaden on the mouth?

Do you  think Jaden is embarassed by the PDA or do you think he’s used to his daddy’s antics?