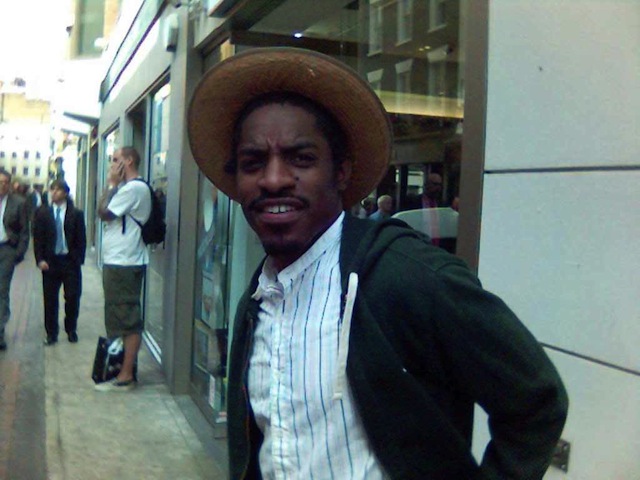 Hip-hop fans eagerly awaiting a new Outkast album are going to have to remain patient. Andre 3000 tells “GQ” that he has no plans to release a new record with Big Boi. Andre does say that he has “a lot of music on the horizon,” most notably a new solo album. The rapper says he’s not sure when he’ll be releasing his next record, but adds that he hopes to have it in stores before the end of the year. Outkast’s last album was 2006’s “Idlewild,” which also served as the soundtrack to their film of the same name. Big Boi has since released the solo album “Sir Lucious Left Foot: The Son of Chico Dusty,” which dropped in 2010.

GQ: So youâ€™re doing Gillette commercials now.
Andre 3000:Â Gillette is getting into a space where guys are now, where guys are wearing more hair on their faces. If you watch the history of Gillette, they pretty much stayed on the path of the clean-shaven guy. This is the first time in their history, in like 110 years, that theyâ€™ve ever had guys in ads with hair on their faces. Itâ€™s a changing of the times and it says a lot about Gillette; theyâ€™re kind of moving with fashion.

GQ: I dig it. And youâ€™re resurrecting your clothing line, Benjamin Bixby?
Andre 3000:Â Yes! But it will just be named Bixby this time. Itâ€™s going to be real exciting, I canâ€™t say too much about it, but I can say this year and next year thereâ€™s going to be a lot of cool things coming from me fashion-wise. Bixby is one of them. Also musically, sound-wise, and fashion. Youâ€™ll see a lot of releases.

GQ: So does that mean we can expect to hear the album weâ€™ve all be waiting on?
Andre 3000:Â It depends on which album youâ€™re talking about.

GQ: A new â€˜Kast album!
Andre 3000:Â Thereâ€™s been a lot of talk on the Internet about an OutKast album and I have to say that as of now, there are no plans for another OutKast album. Thereâ€™s a lot of music on the horizon. Iâ€™ve been living off the excitement of new artists. Iâ€™ve been privileged to have these new artists kind of reach out and grab back and say, â€œHey, Andre, we want you on this song.â€ So Iâ€™ve been taking those calls and for the last two years, Iâ€™ve been doing collaborations. So these new artists have kind of been keeping me alive. Iâ€™ve just really been feeding off of that and this year I think Iâ€™m planning to do a solo project. I donâ€™t know when it will come out, but hopefully itâ€™ll come out this year. As far as OutKast, I really donâ€™t know if or when that will happen.

GQ: Whatâ€™s the new solo album going to be like?
Andre 3000:Â The only thing I can really say is Iâ€™m going to get back to having fun because thatâ€™s what it was all about when I started this in high schoolâ€”with OutKastâ€”those were like high school dreams. Iâ€™m 36 now, so I have grown-man dreams. This album will just be me being myself as normal.

GQ: Random question: Drake quotes your song, â€œSpottieottiedopaliscious,â€ and says, â€œWho else wants to fuck with Hollywood Cole.â€ Iâ€™ve had heated debates with Atlanta natives who say itâ€™s â€œHollywood Courtâ€ [a notoriously tough Atlanta project building.] Settle the debate once and for all!
Andre 3000:Â Holly Court. And itâ€™s funny because J. Cole sampled it [playing off of the word “Cole”]. When they asked for clearance, I told him and his team that I wasnâ€™t saying â€œCole,â€ that I was saying â€œCourt,â€ but they wanted to use it anyway.Â [laughs]Â So I was like, â€œOkay.â€

GQ: At this point in your career, after the sold out shows, movies, diamond-selling records, what keeps you inspired?
Andre 3000:Â Creating. Creating. But itâ€™s always been that. Itâ€™s funny, I donâ€™t even consider myself a rapper, I donâ€™t consider myself a designer, or even an actor. I kind of got that opportunity through the opportunities I had before. I was acting before I started rapping. These things just came. I just like creating stuff and trying to make good work, whatever it is. I donâ€™t care if itâ€™s designing toothbrushes. Itâ€™s just making cool stuff to leave behind, thatâ€™s all it is, itâ€™s nothing more.

GQ: Youâ€™re a perfectionist. Would you change anything about any of your songs?
Andre 3000:Â I couldnâ€™t. I really couldnâ€™t change anything. As an artist you can sit and tinker with stuff forever. You can add and take away but I think thatâ€™s kind of the importance of having someone over you saying, â€œWe need this, this is a deadline.â€ Sometimes those oppositions or those who push and pull are needed because weâ€™ll just sit and tinker forever. There are actually songs onÂ The Love BelowÂ that were not finished, but thatâ€™s how they are, thatâ€™s how it came out.

GQ: Like the last track, â€œA Life in the Day of Benjamin AndrÃ© (Incomplete).â€
Andre 3000:Â Exactly! We were up like three days straight drinking Red Bull or whatever, finishing that album. I just knew I wanted to put that on there, but it wasnâ€™t done, but it was enough.

GQ: Expectations for your next album couldnâ€™t be higher. What are you most afraid of?Â
Andre 3000:Â The biggest fear is me thinking about it too muchâ€”and thatâ€™s why Iâ€™m just trying to catch the energy just like Iâ€™ve done before. What you all have heard before, I was not thinking, I was just going on cruise control. I was just going at it like any artist. When you look at the Wayne, when you look at the Kanyeâ€¦ I can tell when an artist is in the zone because theyâ€™re not thinking and thatâ€™s when youâ€™re at your best. So Iâ€™m just hoping, at this point, I donâ€™t let my history get in front of my future. You know what I mean?