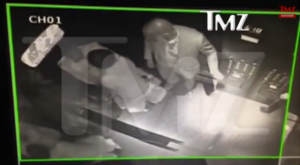 The Carter and Knowles family have finally spoken out about the elevator brawl that took place after the Met Gala last week. According to sources, Rachel Roy is the real reason Solange went postal on brother-in-law.

It has been three days since the Solange VS Jay-Z footage has went viral. And since then many theories have popped up about why Solange would attack her brother-in-law. Now, the truth has finally came to the light. The three have released statements addressing the incident.

As a result of the public release of the elevator security footage from Monday, May 5th, there has been a great deal of speculation about what triggered the unfortunate incident. But the most important thing is that our family has worked through it,” the trio said in a statement to The Associated Press Thursday.

Jay and Solange each assume their share of responsibility for what has occurred. They both acknowledge their role in this private matter that has played out in the public. They both have apologized to each other and we have moved forward as a united family.

The reports of Solange being intoxicated or displaying erratic behavior throughout that evening are simply false,” the family’s statement continued. “At the end of the day families have problems and we’re no different. We love each other and above all we are family. We’ve put this behind us and hope everyone else will do the same.

Apparently, fashion designer Rachel Roy was getting “too close” to Jay-Z and Solange did not approve.  “Solange doesn’t like it, and Beyoncé doesn’t like it,” explained a source. They also claimed that Solange demanded that Roy backed up from her sister’s man; however, Roy was not backing down from the argument. It eventually led to Beyoncé and Jay-Z having to intervene for the two to stop arguing.

Shortly after the disagreement, the three decided to leave the party. Solange and Beyoncé were going home, but Jay-Z wanted to attend Rihanna’s after party at Up & Down. Solange believed that Roy would also be in attendance and was not pleased, which led to her going off the way she did on the elevator. A very angry Solange rushed toward the hip-hop artist, as her sister watched. After three minutes of Solange attacking Jay-Z and him blocking her hits, the bodyguard and Beyoncé manage to separate the two.

It is true that families fight; it is a natural thing. But was Solange wrong for the way she handled this situation? Or was she right for standing up for her sister? Comment below and let us know what you think.