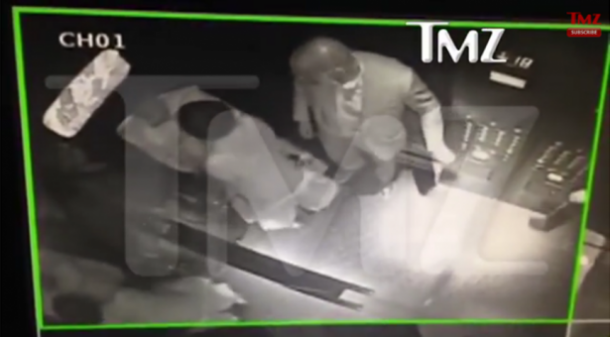 OMG, Solange went ham (beat the mess) on Jay Z and it’s caught on TAPE with Beyonce looking on casually. What is really going on with the Carters/Knowles?

Jay Z was attacked by Beyoncé’s sister Solange who commenced to swing and kick him inside an elevator. The surveillance video within the elevator shows Beyonce, Solange, and Jay Z boarding and then Solange going straight ham on the her brother-in-law.

The attack happened at a Met Gala after party last week at the Standard Hotel in NYC. A large man — who appears to be a bodyguard — attempts to hold Solange back, but she manages to connect at least 3 times. At one point Solange throws a kick and Jay grabs her foot, but never attempts to strike her. Beyonce stands by without getting physically involved; yall know the QUEEN don’t fight!

It’s unclear what triggered the fight hopefully it was just a JOKE.

If you look closely, you see the bodyguard hit the emergency stop switch on the 12th floor — mid fight — presumably to keep the fight private.

What is really going on? We also see that the family left the party in two separate vehicles. Is there trouble in paradise? We hope not!