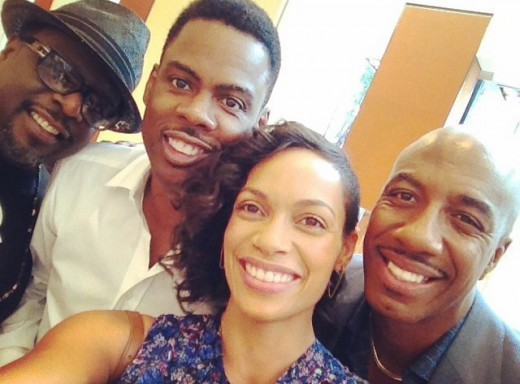 The first official trailer for Chris Rock’s latest film, “Top Five,” has been released! It is a comedy with a star-studded cast, which include Chris Rock, Gabrielle Union, Rosario Dawson, and more.

The first trailer for comedian Chris Rock’s newest film “Top Five” has been released! The film, co-written and directed by Rock is the story of a comedian named Andre Allen (Rock) dubbed “the funniest man in America,” who is pretty much done with the “funny” business.

Rock’s character is engaged to reality star Erica Long (Gabrielle Union) and the trailer alludes to his hesitance about marriage as well as what potential sparks between him and New York Times writer Chelsea Brown (Rosario Dawson). It is Brown who asks him the blunt question during an interview: “How come you’re not funny anymore?” The question appears to be the film’s most important because apparently, only Andre Allen understands why he’s over being funny and no one else.

The movie is chock full of comedic royalty as there are appearances by Cedric the Entertainer, Tracy Morgan, Kevin Hart, Whoopi Goldberg, and others. I find this story to be interesting one because it make me wonder if Chris Rock actually feels “over” the funny! Whether or not, the trailer has my attention and I’m thinking (and hoping!) there will be plenty of laughs at every turn!

Check out the “Top Five” trailer below: