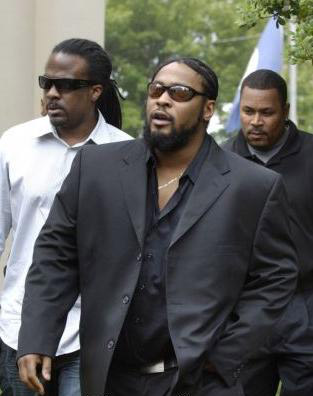 D’Angelo is denying that he attempted to solicit an undercover officer for sex last weekend. AllHipHop.com is reporting that the vocalist has pleaded not guilty to charges that he solicited a prostitute. D’Angelo’s rep, Lindsay Guion, says the “Untitled” singer is looking forward to beating the charge and is eagerly awaiting the release of his next album. Guion states, quote, “We would like his fans and the public at large to know that D’Angelo has pled not guilty – and is contesting the allegations made against him. Also know that he is in good health and extremely excited about his forthcoming new album.” D’Angelo – whose real name is Michael Archer – was arrested last Saturday after police say he attempted to give an undercover New York cop 40-dollars for oral sex. A hearing in the case is set for May 4th.

A release date and title for D’Angelo’s next record have not been announced. His last album, 2000’s “Voodoo,” has sold more than one-point-seven-million copies thanks in part to the hit single “Untitled (How Does It Feel).”