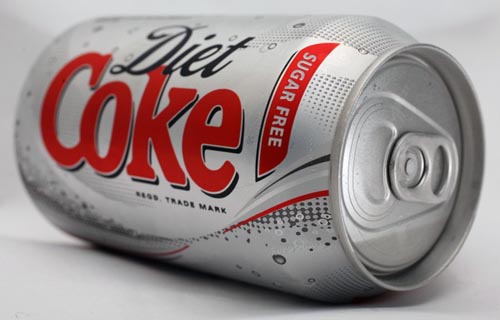 Diet soda might not help you stay trim after all, new research suggests.

A study presented at a American Diabetes Association meeting this week shows that drinking diet soda is associated with a wider waist in humans. And a second study shows that aspartame — an artificial sweetener in diet soda — actually raises blood sugar in mice prone to diabetes.

“Data from this and other prospective studies suggest that the promotion of diet sodas and artificial sweeteners as healthy alternatives may be ill-advised,” study researcher Helen P. Hazuda, Ph.D., a professor and chief of clinical epidemiology at the University of Texas Health Science Center San Antonio’s School of Medicine, said in a statement. “They may be free of calories but not of consequences.”

In the first study, researchers collected height, weight, waist circumference and diet soda intake data from 474 elderly people who participated in the San Antonio Longitudinal Study of Aging. They were followed up an average of 9.5 years later, according to the research.

Artificial sugar didn’t produce any better results in the second study in mice. Researchers for this study found that diabetes-prone mice that were fed a diet that included aspartame for three months, had higher blood glucose levels than mice not given aspartame.

This isn’t the first news illuminating diet soda’s health risks. A study published earlier this year found people who drink the beverage every day have a higher stroke and heart attack risks. And UK researchers found earlier this month that sugary drinks can dull taste buds, leading consumers to crave the sweet stuff even more.