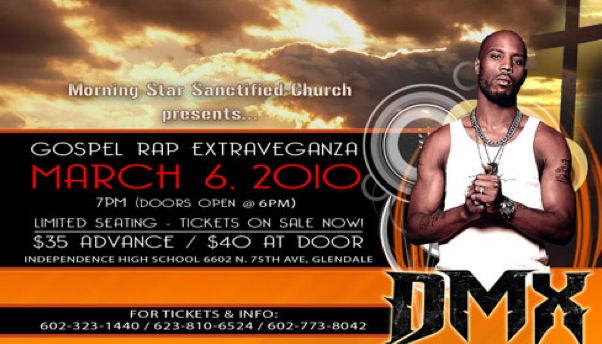 DMX’s weekend performance for a church fundraiser has been called off. TMZ.com is reporting that Glendale, Arizona’s Independence High School has decided not to let Morning Star Sanctified Church hold their “Gospel Rap Extravaganza” on their campus. The school reportedly decided to pull out when they found out that DMX – who has a lengthy criminal history – was going to be involved.. Pastor Barbara King says she’s taken out a one-million-dollar insurance policy on the concert, but Independence High School wasn’t willing to change their mind. The school will return Morning Star’s 500-dollar deposit. The church is giving everyone who purchased a ticket a refund, and is planning to hold the event at a later date at the church.

DMX is currently working on the albums “Walk With Me Now” and “You’ll Fly With Me Later.” Both projects are expected to arrive later this year.