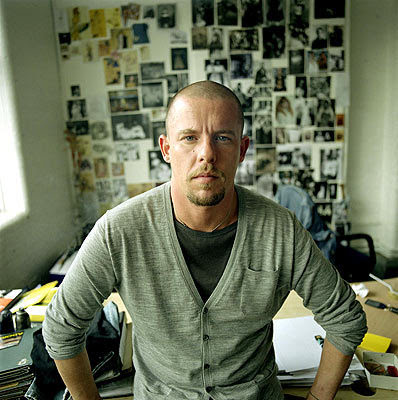 Alexander McQueen, one of Monica’s favorite Â british fashion designer, has died aged 40, his company confirmed today. He was found dead in his home this morning.

One of Londonâ€™s most talented and respected designers, his death comes on the opening day of New York fashion week. He was due to show his autumn/winter 2010 collection in Paris in March.

The son of a taxi driver and one of six children, Alexander McQueen was born in the East end of London in 1969. He left school at 16 to begin an apprenticeship on Savile Row with the tailor Anderson & Sheppard. His major breakthrough came when he was discovered by the Vogue stylist Isabella Blow in 1991. She bought the whole of his MA collection and promoted it within the pages of the fashion magazine. When Blow died in 2007, McQueen dedicated his spring/summer 2008 collection to her memory.

Nicknamed the bad boy of British fashion, McQueen took the helm of the Parisian label Givenchy in 1996. He left in 2000 when the Gucci group bought a 51% stake in his eponymous label. He received the designer of the year award at the British fashion awards four times, as well as the international designer of the year award from the Council of Fashion Designers of America. He was awarded the CBE in 2003.

Alexander McQueenâ€™s company released a statement on behalf of the designerâ€™s family saying, â€œOn behalf of Lee McQueenâ€™s family, Alexander McQueen today announces the tragic news that Lee McQueen, the founder and designer of the Alexander McQueen brand has been found dead at his home. At this stage it is inappropriate to comment on this tragic news beyond saying that we are devastated and are sharing a sense of shock and grief with Leeâ€™s family. Leeâ€™s family has asked for privacy in order to come to terms with this terrible news and we hope the media will respect this.â€